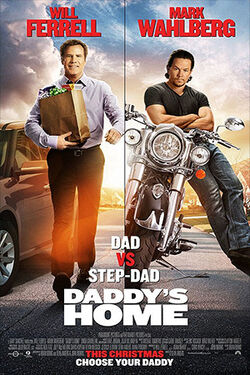 Daddy's Home is an 2015 American comedy film directed by Sean Anders and written by Brian Burns. The film stars Will Ferrell, Mark Wahlberg and Linda Cardellini. It was released on December 25, 2015, by Paramount Pictures.

A mild-mannered radio executive (Will Ferrell) competes for the affection of his stepchildren when their freewheeling and freeloading father (Mark Wahlberg) shows up.

The principal photography on the film began on November 17, 2014, in New Orleans, Louisiana. On November 24 and 25, filming took place at Edward Hynes Charter School. On January 12, 2015, actors were spotted filming in Lakeview area. On January 21, 2015, a scene was shot during a New Orleans Pelicans and Los Angeles Lakers game where Ferrell smashed a cheerleader (played by stuntwoman/wrestler Taryn Terrell) in the face with a basketball. Filming was scheduled to wrap on February 3, 2015, but lasted through February 6.

Retrieved from "https://movies.fandom.com/wiki/Daddy%27s_Home?oldid=132725"
Community content is available under CC-BY-SA unless otherwise noted.