watch 01:56
The Loop (Movies)
Do you like this video?
Play Sound
Dame Judi Dench 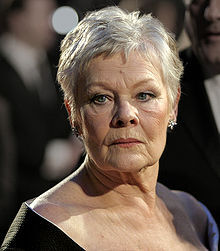 Judi Dench was born on December 9, 1934 in York, England to parents Eleanora Olave (née Jones) and Reginald Arthur Dench. She has a brother named Jeff.

Judi Dench began acting in 1957 on the stage. She worked with the Old Vic Company at the Royal Court Theatre in Liverpool. In 1964 she made her film debut in The Third Secret. She got the role of M, James Bond's boss, in the James Bond series. She acted in six James Bond films. She has received great acclaim for the films Mrs. Brown, Tomorrow Never Dies, Shakespeare in Love and Notes on a Scandal. In 2011 she had a role in J. Edgar. She will play Victoria Robin, Christopher's mean grandmother in Disney's Chistopher Robin 2 (2021).

Retrieved from "https://movies.fandom.com/wiki/Dame_Judi_Dench?oldid=268029"
Community content is available under CC-BY-SA unless otherwise noted.