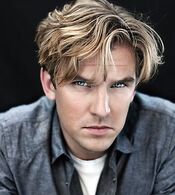 Dan Stevens was born at Croydon in Surrey on 10th October 1982. His parents are teachers. He was educated at Tonbridge School and trained in acting at the National Youth Theatre of Great Britain. He studied English Literature at Emmanuel College, Cambridge. Whilst he was a Cambridge undergraduate, he acted in several student drama productions. During one of his university summer holidays in August 2003 he went to Slovakia where he filmed his scenes for the Hallmark production of "Frankenstein" (2004). Dan played the part of Henry Clerval and the mini-series was first broadcast on American television on 5th October 2004.

Then in May 2006 he played Nick Guest, the protagonist in The Line of Beauty (2006). This three part television mini-series was adapted by Andrew Davies from the 2004 Booker prize winning novel by Alan Hollinghurst. The Line of Beauty (2006) is about Nick Guest's relationship with his university friend Toby Fedden. The story takes place in the 1980s. It is set against the backdrop of Margaret Thatcher's free market economic policies and the spread of the acquired immunity deficiency syndrome, (AIDS). These two social developments directly affect the characters in the story because Toby's father Gerald is a Conservative member of parliament and Nick is homosexual.

At the end of the year Dan played Lord Holmwood in a television dramatization of Dracula (2006) (TV), which was broadcast on 28th December 2006. In 2007 Dan played the part of Michael Faber in Miss Marple: Nemesis (2007) (TV), an Agatha Christie adaptation with Geraldine McEwan in the role of Miss Jane Marple. He also featured in the cast of Maxwell (2007) (TV), a television drama about the famous newspaper magnate. Maxwell (2007) (TV) was first broadcast on British television on 4th May 2007. David Suchet played Robert Maxwell, and Dan took the part of Basil Brookes, one of the press baron's financial directors.

Dan played the part of Edward Ferrars in a television dramatization of Jane Austen's novel, Sense & Sensibility (2008). This was broadcast in three episodes on BBC1 between Tuesday 1st and Sunday 13th January 2008.

He has starred in the TV series Downtown Abbey and will be appearing along with Alicia Silverstone in the movie Vamps (2012).[1]

Retrieved from "https://movies.fandom.com/wiki/Dan_Stevens?oldid=72499"
Community content is available under CC-BY-SA unless otherwise noted.