watch 00:59
The Loop (Movies)
Do you like this video?
Dances with Wolves 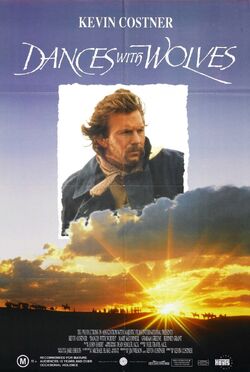 Dances with Wolves was an epic 1990 Western film starring and directed by Kevin Costner that won the Academy Award for Best Picture in 1991.

The film, like the book of the same name, the story of a Civil War-era United States Army lieutenant who travels to the American frontier to find a military post and eventually befriends a local Sioux tribe. The movie won seven Academy Awards.

Lt. John Dunbar is dubbed a hero after he accidentally leads Union troops to a victory during the Civil War. He requests a position on the western frontier, but finds it deserted. He soon finds out he is not alone, but meets a wolf he dubs "Two-socks" and a curious Indian tribe. Dunbar quickly makes friends with the tribe, and discovers a white woman who was raised by the Indians. He gradually earns the respect of these native people, and sheds his white-man's ways. Not long after, the frontier becomes the frontier no more, and as the US army advances on the plains, John must make a decision that will not only affect him, but also the lives of the natives he now calls his people.

Retrieved from "https://movies.fandom.com/wiki/Dances_with_Wolves?oldid=120276"
Community content is available under CC-BY-SA unless otherwise noted.