watch 02:03
Wiki Targeted (Entertainment)
Do you like this video?
Play Sound
Danny DeVito 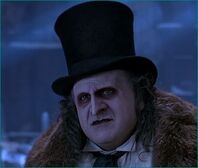 Daniel Michael "Danny" DeVito, Jr. (born November 17, 1944) is an American actor, comedian, director and producer. He first gained prominence for his portrayal of short statured dispatcher Louie De Palma on the ABC and NBC television seriesTaxi(1978–1983), for which he won a Golden Globe and an Emmy.

DeVito and his wife, Rhea Perlman, founded Jersey Films, a production company known for films such as Pulp Fiction, Garden State, and Freedom Writers. DeVito also owns Jersey Television, which produced the Comedy Central series Reno 911!. DeVito and Perlman also starred together in his 1996 film Matilda, based on Roald Dahl's children's novel. He currently stars as Frank Reynolds on the FXsitcom It's Always Sunny in Philadelphia.

He also directs and produces graphic short horror films for his Internet venture "The Blood Factory." He has appeared in several of them, as have friends of his and members of his family

Retrieved from "https://movies.fandom.com/wiki/Danny_DeVito?oldid=278413"
Community content is available under CC-BY-SA unless otherwise noted.