watch 00:59
The Loop (Movies)
Do you like this video?
Daredevil 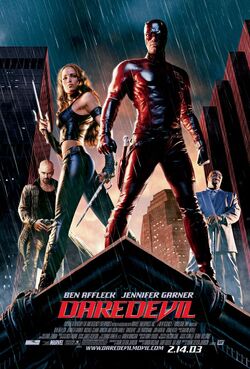 Daredevil is a 2003 superhero film based on the fictional Marvel Comics character of the same name. Mark Steven Johnson directed the film, which stars Ben Affleck as Matt Murdock, as well as Jennifer Garner, Michael Clarke Duncan, and Colin Farrell. The film follows Matt Murdock, a blind man who's a lawyer by day and a superhero by night. The films budget was $100 million and the film grossed $180 million worldwide with $102 million coming from North America.

As a child, Matthew Murdock lived in Hell's Kitchen with his washed-up boxer father, Jack Murdock. Matt's father constantly reminds Matt to get an education and make something of himself, and not wind up like him. One fateful day, when young Matt takes a shortcut home, he stumbles across his father beating up a man at the behest of local mob boss Fallon. Horrified, Matt runs blindly away from the scene, and runs afoul of a forklift which swerves to avoid him and accidentally pierces a barrel of toxic fluid, drenching Matt's face in the substance.

Retrieved from "https://movies.fandom.com/wiki/Daredevil_(2003)?oldid=130430"
Community content is available under CC-BY-SA unless otherwise noted.