Start a Wiki
watch 01:48
The Loop (Movies)
Do you like this video?
Dark Shadows 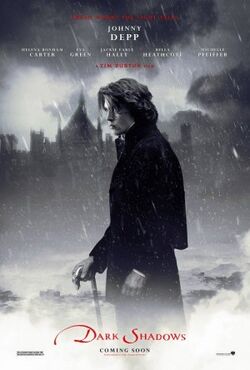 Dark Shadows is a Tim Burton directed film based on the British television show from the 1960s of the same name.

In 1752, the Collins family sails from Liverpool, England to North America. The son, Barnabas, grows up to be a wealthy playboy in Collinsport, Maine and is the master of Collinwood Manor. He breaks the heart of a witch, Angelique Bouchard, who turns him into a vampire and buries him alive. In 1972, Barnabas is accidentally freed from his coffin and returns to find his once-magnificent manor in ruin. It is occupied by dysfunctional Collins descendants and other residents, all of whom have secrets.[1]

Retrieved from "https://movies.fandom.com/wiki/Dark_Shadows?oldid=166733"
Community content is available under CC-BY-SA unless otherwise noted.