Start a Wiki
watch 01:48
The Loop (Movies)
Do you like this video?
David Arquette 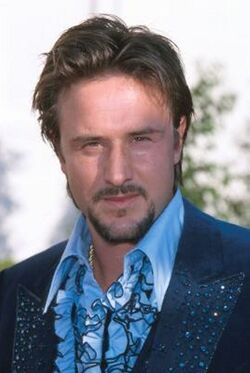 David Arquette (born September 8, 1971) is an American actor, film director, producer and screenwriter. He is best known in the Scream series, appearing in all films as Dewey Riley and Buffy the Vampire Slayer.

Arquette was born in a Subud commune in Bentonville, Virginia. He is the youngest child of Brenda Olivia "Mardi" (née Nowak) and Lewis Arquette, also an actor. Arquette's paternal grandfather was comedian Cliff Arquette. Arquette's four siblings, Rosanna, Alexis, Richmond, and Patricia, are all actors.

Arquette began appearing films such as Buffy the Vampire Slayer, Airheads and Wild Bill. He then appeared in one of the most known horror films, Scream, which added on to sequels Scream 2, Scream 3 and Scream 4.

Retrieved from "https://movies.fandom.com/wiki/David_Arquette?oldid=106130"
Community content is available under CC-BY-SA unless otherwise noted.