Start a Wiki
watch 16:45
The Loop (Movies)
Do you like this video?
David Giler 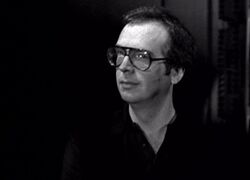 David Kevin Giler is an American filmmaker who has been active in the motion picture industry since the early 1960s.

He started his career as a writer, providing scripts for television programs such as Kraft Suspense Theatre and The Man from U.N.C.L.E.. He then moved to screenplays in the 70's, helping to write films such as The Parallax View and the original version of Fun With Dick and Jane.

He produced his first film in 1970, the critically reviled Myra Breckinridge, an adaptation of Gore Vidal's controversial novel (he also co-wrote the film with director Michael Sarne).

David Giler helped Walter Hill produce the legendary horror thriller Alien in 1979, and it is for this film that he is probably best remembered. He and Hill became embroiled in a much-publicized behind-the-scenes fight with Alien's original writer, Dan O'Bannon, over who was to receive screenplay credit. Giler and Hill claim that they completely rewrote the script from top to bottom, and therefore they wanted to relegate O'Bannon to a "story by" credit only. O'Bannon claims that they did little more than change the names of the characters and dialogue, and felt that the two were trying to bully him out of the more prestigious screenplay credit. As evidenced by the interviews on the supplemental DVD features, the two parties were extremely antagonistic when it comes to this topic (O'Bannon has since died), though O'Bannon was the only one to receive credit for the screenplay in the final film. The various drafts can be found online, allowing audiences to decide for themselves.

David Giler worked with Walter Hill on several more projects, including the continuation of the Alien franchise. The two were responsible for the final and very controversial rewrite of the Alien 3 story which killed off the Bishop, Hicks and Newt characters from Aliens.

David Giler as a producer with Bill Badalato, Gordon Carroll, Walter Hill and Sigourney Weaver as a co-producer.

David Giler as a producer with John Davis and Walter Hill.

David Giler as a producer with Walter Hill and Ridley Scott.

Retrieved from "https://movies.fandom.com/wiki/David_Giler?oldid=56287"
Community content is available under CC-BY-SA unless otherwise noted.