View src
watch 01:33
Wiki Targeted (Entertainment)
Do you like this video?
Play Sound
Days of Thunder 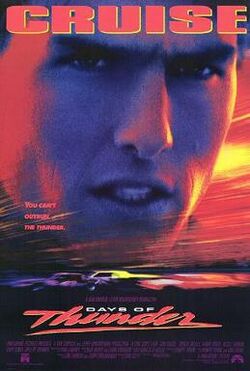 This is the first of three films to star both Cruise and Kidman (the other two being Far and Away and Eyes Wide Shut). The film received mixed reviews, with criticism aimed at its unrealistic special effects, characters, screenplay, acting, dialogue and similarities to Top Gun, but was widely praised for its action sequences, Hans Zimmer's musical score, fast pace, and the performances of Cruise and Kidman.

Cole Trickle is a young racer from Eagle Rock, California, with years of experience in open-wheel racing, winning championships in the United States Auto Club (USAC). Originally setting his sights on the Indianapolis 500, Cole realizes that "To win in Indy I'd need a great car, but stock cars are all the same". He is recruited by Chevrolet dealership tycoon Tim Daland to race for his team in the NASCAR Winston Cup Series. Daland brings former crew chief and car builder Harry Hogge, who left NASCAR to avoid investigation of the death of Buddy Bretherton, out of retirement to lead Cole's pit crew. After Cole sets a fast time in a private test at Charlotte Motor Speedway, Hogge builds him a new Chevrolet Lumina.

In his first few races, Cole has difficulty adjusting to the larger NASCAR stock cars and communicating with his crew, while being intimidated on the track by Winston Cup Champion and dirty driver Rowdy Burns; these obstacles, combined with crashes and blown engines, prevent Cole from finishing the races. Discovering that Cole does not understand common NASCAR terminology, Harry puts him through rigorous training. This pays off at Darlington, when Cole uses a slingshot maneuver from the outside line to overtake Rowdy and win his first race.

The rivalry between Cole and Rowdy intensifies throughout the season until the Firecracker 400 in Daytona, where both drivers are seriously injured after being caught in "The Big One". Recovering in Daytona Beach, Cole develops a romantic relationship with Dr. Claire Lewicki, a neurosurgeon at a local hospital. NASCAR President Big John brings Rowdy and Cole together in a meeting and warns them that he and his sport will no longer tolerate any misbehaviour from the two rivals. Persuaded by Big John, Cole and Rowdy have dinner and settle their differences by smashing rental cars in a race on the beach. The bitter rivals soon become close friends.

Daland hires hot-shot rookie Russ Wheeler to fill Cole's seat until Cole returns to active duty, and then expands his team, with Daland now fielding two teams – the second car driven by Wheeler, of which Harry disapproves. Though Cole shows signs of his old self, he falls into a new rivalry with Russ with no help from the inexperienced Daland, who is defensive of his new driver. At North Wilkesboro, Russ blocks Cole's path during their pit stop, and later forces Cole into the outside wall on the last lap to win the race. In retaliation, Cole crashes into Russ’ car after the race, leading to a fight between Harry, Daland, and both of Cole and Russ’s pit crews, with Daland firing both Cole and Harry in the process.

Rowdy learns he has to undergo brain surgery to fix a broken blood vessel, and asks Cole to drive his car at the Daytona 500 so his sponsors will pay for the year. Cole reluctantly agrees and convinces Harry to return as his crew chief. Hours prior to the race, Harry discovers metal in the oil pan, a sign of engine failure, and manages to procure a new engine from Daland, who still believes in his former driver's promise. During the race, Cole's car is spun out by Russ and suffers a malfunctioning transmission, but the combined efforts of Harry's and Daland's pit crews manage to fix the problem and get Cole back on the lead lap. On the final lap, Russ predicts that Cole will attempt his signature slingshot maneuver from outside, but Cole tricks him with a crossover, overtaking him from the inside to win his first Daytona 500.

Cole drives into victory lane, where he and his pit crew celebrate with Claire. He approaches Harry, sitting alone, but Harry is lost for words. Cole asks Harry to walk with him and Harry agrees, challenging him to a foot race to victory lane.