Start a Wiki
watch 01:27
The Loop (Movies)
Do you like this video?
Dead Man Down 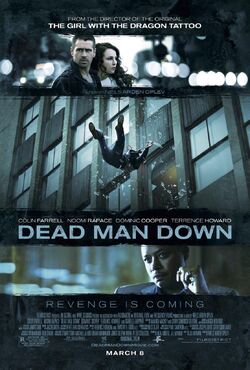 Victor is the right hand man to an underground crime lord in New York City. He seeks to avenge the death of his wife and daughter caused by his boss. When his employer is threatened by a mysterious killer, Victor also becomes detective. Victor is seduced and blackmailed by Beatrice, a victim turned avenger whose intense chemistry leads them spiraling into payback delivered in violent catharsis.

Retrieved from "https://movies.fandom.com/wiki/Dead_Man_Down?oldid=119432"
Community content is available under CC-BY-SA unless otherwise noted.