Start a Wiki
watch 01:27
The Loop (Movies)
Do you like this video?
Deadfall 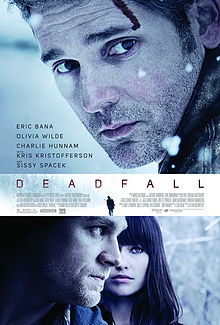 Deadfall, previously titled Kin and Blackbird, is a 2012 crime drama film directed by Stefan Ruzowitzky, from a screenplay by Zach Dean.

Siblings Addison and Liza are on the run from a casino heist gone wrong. When a car accident leaves their wheel man and a state trooper dead, they split up and make a run for the Canadian border in the worst of circumstances - a near whiteout blizzard. While Addison heads cross-country, creating mayhem in his wake, Liza is picked up by ex-boxer Jay, en route for a Thanksgiving homecoming with his parents, June and retired sheriff Chet. It's there the siblings are reunited in a terse and thrilling showdown that pushes the bonds of family to the limit.

Retrieved from "https://movies.fandom.com/wiki/Deadfall?oldid=119379"
Community content is available under CC-BY-SA unless otherwise noted.