Moviepedia
Register
Don't have an account?
Sign In
Advertisement
in: Rated R, Films directed by Quentin Tarantino, 2007 films,
and 5 more

for strong graphic bloody violence and gore, pervasive language, some sexuality, nudity and drug use

Death Proof is a 2007 American action thriller film written and directed by Quentin Tarantino. The film centers on a psychopathic stunt man who stalks young women before murdering them in staged car accidents using his "death-proof" stunt car. The film pays homage to exploitation, muscle cars, and slasher film genres of the 1970s.

Three friends (Arlene, Shanna, and radio DJ “Jungle” Julia Lucai) drive down Congress Avenue in Austin, Texas, on their way to celebrate the night. While bar-crawling, Julia reveals that she made a radio announcement earlier that morning, offering a free lap dance from Arlene in return for addressing her as "Butterfly," buying her a drink, and reciting a segment of the poem Stopping by Woods on a Snowy Evening. They are unaware they are being stalked by an aging and sadistic Hollywood stunt double, “Stuntman” Mike. After trailing them to a bar, Mike follows the instructions from the radio announcement to get the lap-dance. Despite some initial trepidation, due to having seen Mike's car earlier in the day, and asking if he has been following them, Mike puts her at ease (partly by saying she's chicken), and Arlene agrees to the dance. 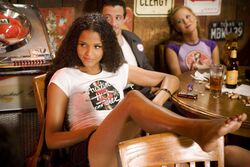 The three women prepare to depart, while Pam, another intoxicated female bar patron, has been impressed by Mike and accepts a ride home from him, considering him to be a teetotaler and a safe ride. Mike takes Pam to his matte black 1971 Chevy Nova SS 424, which is a stunt car rigged with a safety cage inside. As Mike drives Pam off, it becomes clear he is trying to kill her, reminding her that his car is "death proof", but only to the driver. Since the passenger side has no safety restraints at all, he kills her by driving recklessly and then slamming on the brakes, which smashes her skull into the dashboard. Mike speeds off, leaving behind photos he took earlier of the three other women, so as not to get caught with any evidence. He eventually comes on their red 1993 Honda Civic Hatchback on an empty road, and drives at full speed directly into it. The force of the impact kills all four women, and also covers up the real reason of Pam's death. (There was another woman driver in the car known as Lana Frank, whom they met up with earlier at the bar.)

The local hospital finds Mike with only minor injuries (broken toenail), and asserts that since Mike was sober while the four women were intoxicated, he cannot be charged. This concerns Texas Ranger Earl McGraw, who is convinced Mike is guilty but cannot investigate without evidence. McGraw warns Mike that should this happen again, he'd better "make damn sure" it was not in Texas.

Fourteen months later, three young women, Abernathy Ross, Kim Mathis, and Lee Montgomery, are traveling through Lebanon, Tennessee. They stop briefly at a convenience store, where Mike is resting in his new ride, a 1969 Dodge Charger R/T, and is intrigued by the women. The women, unaware of Mike, pick up their friend, stuntwoman Zoë Bell (who is playing herself), from the airport. Zoe informs them she wants to test-drive a white 1970 Dodge Challenger R/T, exactly the same type of car from the 1971 film, Vanishing Point, which just happens to be nearby. After they get to the car's location, Abernathy tries to convince the owner, Jasper, to let them "test drive" it alone. He refuses at first, but after Abernathy tells him Lee will stay behind (under the false pretense that they are in town to film a porno, of which Lee is the star), he agrees. 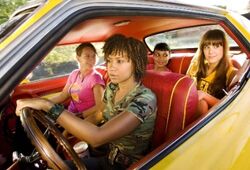 In the process of all this, Zoe reveals to Abernathy and Kim that she has an ulterior motive in taking the car; she wants to play a game called "Ship's Mast", where she rides on the car's hood using only leather belts to hold onto, while Kim drives it at high speeds. The three enjoy the stunt, until Mike shows up and rear ends their car at high speed. The two cars engage in a harrowing high-speed chase for a distance before they both spin out on opposite sides of the roads, and Zoe is finally thrown from the car's hood. Mike gets out to brag to the girls but Kim fires a gun, wounding him in the shoulder. As Mike gets back in the car and flees, Zoe shows that she is okay, and the three women agree to get revenge on Mike.

Wounded, Mike is not able to outrun the women, and eventually his car is T-boned by the women in their car. The women pull him from the car and beat him savagely in the head until he falls unconscious. After a short credits sequence, Abernathy delivers a final axe kick to Mike's head.

The story for Death Proof developed from Quentin Tarantino's fascination for the way stuntmen would “death-proof” stunt cars so a driver could survive horrific, high-speed crashes and collisions. This inspired Tarantino to create a slasher film featuring a deranged stuntman who stalks and murders sexy young women with his “death-proof” car.

Tarantino remembers, “I realized I couldn't do a straight slasher film, because with the exception of women-in-prison films, there is no other genre quite as rigid. And if you break that up, you aren't really doing it anymore. It's inorganic, so I realized—let me take the structure of a slasher film and just do what I do. My version is going to be fucked up and disjointed, but it seemingly uses the structure of a slasher film, hopefully against you.”

After being impressed by stuntwoman Zoë Bell, who worked as Uma Thurman's stunt double in Tarantino's earlier film Kill Bill, Tarantino wrote her the leading female role. This was her first on-screen acting which Bell initially thought was going to be a cameo role. The character Zoë was based on the stuntwoman herself and includes small stories based around her real life experiences, some with Tarantino. When her name was featured on the film posters opposite Kurt Russell, Rosario Dawson and Rose McGowan, she realized how big the role was.