Start a Wiki
watch 01:27
The Loop (Movies)
Do you like this video?
Dee Wallace 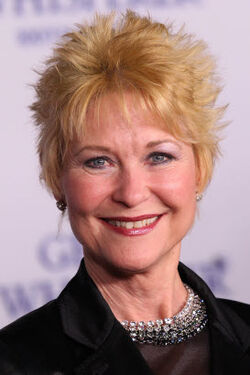 Dee Wallace or Dee Wallace Stone (born Deanna Bowers; December 14, 1948), is an American actress and scream queen. She is best known in films such as E.T. the Extra-Terrestrial, The Hills Have Eyes (1977) The Howling, Cujo and Critters.

Wallace was born in Kansas City, Kansas, the daughter of Maxine (née Nichols) and Robert Stanley Bowers. She attended Wyandotte High School before attending the University of Kansas and graduating with an education degree. She briefly taught high school drama at Washington High School in her native Kansas City in the early 1970s.

In 1975, Wallace began her film debut and went on to appear in films such as The Hills Have Eyes (1977) and The Howling. She then was most widely known for being in the 1982 film, E.T. the Extra-Terrestrial. Later on she starred in a bigger role in the film, Cujo.

Retrieved from "https://movies.fandom.com/wiki/Dee_Wallace?oldid=96317"
Community content is available under CC-BY-SA unless otherwise noted.