Start a Wiki
watch 16:45
The Loop (Movies)
Do you like this video?
Deepwater Horizon 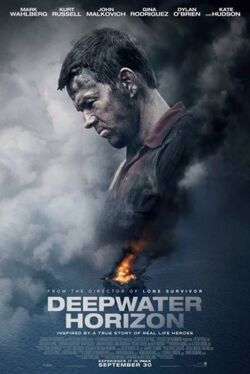 Deepwater Horizon is a 2016 American biographical disaster thriller film directed by Peter Berg, written by Matthew Sand and Matthew Michael Carnahan and starring Mark Wahlberg, Kurt Russell, John Malkovich, Gina Rodriguez, Dylan O'Brien, and Kate Hudson. It is based on the 2010 Deepwater Horizon explosion and oil spill in the Gulf of Mexico.

Based on the true events that occurred on an oil rig in the Gulf of Mexico on April 20, 2010, the story chronicles the courage of those who worked on the Deepwater Horizon and the extreme moments of bravery and survival in the face of what would become one of the biggest man-made disasters in world history.

On review aggregator website Rotten Tomatoes, the film has an approval rating of 83%, based on 23 reviews, with an average rating of 6.9/10. The site's critical consensus reads, "Deepwater Horizon makes effective use of its titular man-made disaster to deliver an uncommonly serious – yet still suitably gripping – action thriller." On Metacritic, which assigns a normalized rating, the film has a score 62 out of 100, based on 14 critics, indicating "generally favorable reviews".

Retrieved from "https://movies.fandom.com/wiki/Deepwater_Horizon?oldid=125996"
Community content is available under CC-BY-SA unless otherwise noted.