Start a Wiki
watch 16:45
The Loop (Movies)
Do you like this video?
Delhi Safari 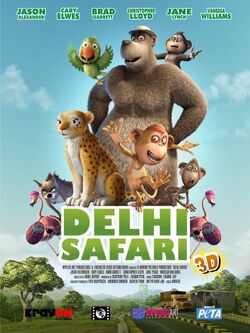 The movie starts out in Sanjay Gandhi National Park in Mumbai, India. Yuvi, a small leopard cub, begins to cry about losing his home. The actual movie then starts with Yuvi and his dad, Sultan, play-fighting in the forest. Yuvi's mom Begum, shows up and gets angry at both of them for roughhousing. Later that day, bulldozers come and start ramming trees down while chasing after Sultan and his cub. Begum arrives at the scene when the hunters get ready to shoot the leopard and his cub. Sultan ends up picking Yuvi up with his mouth and throws him toward Begum for safety, then he pounces and roars at one of the hunters before getting shot.

All of the animals mourn Sultan's death and suggest moving somewhere else. Yuvi goes to visit the mail-owl the next morning, and is accidentally told about a parrot who lives in the city. The parrot's name is Alex and is said to speak a total of 5 human languages and can possibly speak to the humans. Bajrangi the monkey is obsessed with destroying humanity and making all humans suffer to the point where they'll go extinct. He is loaded with firearm and weapons and is determined to kill humans. However, Yuvi and the mail-owl manipulate Bajrangi into going into helping them go into the city to find Alex the parrot. Baga the guru bear, Yuvi the leopard cub, Bajrangi the monkey(along with his two monkey sidekicks Marella and Barella) decide to travel to the city to find Alex the parrot without Begum knowing. They reach the modern home of a Bollywood movie director and find his parrot recording his owner's girlfriend, which then Bajrangi grabs Alex by the neck and takes him back to the jungle.

Begum gets angry at Baga for taking Yuvi to the city where he could've gotten killed, but she is even more angry at Bajrangi and Alex for bickering throughout the whole scene. Alex shows to be a cunning parrot who could care less about the status of the wildlife. While ranting, he accidentally mentions Delhi, India's capital. The entire group of animals gets curious and Alex starts refusing to help them. A bulldozer suddenly comes almost running them over before they escaped.

Alex the parrot, Bajrangi the monkey and his sidekicks, Baga the bear, and Begum the leopardess set off on the path to Delhi, leaving Yuvi behind while singing "Delhi Safari, hey!". They climb onto a train which starts going north to Gujarat. During the night, all the animals were sound asleep except Bajrangi. Bajrangi starts thinking of killing Alex in his sleep. He attempts to avoid Baga's wrath by slowly opening the noisy machete knife in order to kill Alex. Right when he holds the knife up in the air in excitement, Alex wakes up and starts screaming. The train immediately stops at a station and people outside start panicking, and a woman starts yelling that she saw a leopard. Thinking that Alex's scream gave them away, the group then wakes up and quickly hide behind the crates. Out of nowhere, Yuvi opens the door and slowly peeks in asking if they're there before the humans start shouting that they see the animal. The humans then start running toward the boxcar seeing nothing there and going back to usual business. The animals sneaked out of the boxcar into a field before the train went off into the distance.

Begum then starts questioning Yuvi on why he gave them away. Yuvi claims he saw his dad appear to him and tell him to go with them, while Baga claims it was just a dream. Alex starts to re-enact a court scene accusing Bajrangi of trying to kill him, in which the two start quarelling. Begum then gets angry, sternly tells Bajrangi "not one more word from you", and starts threatening Alex that he'll never reach home without them. Baga then convinces Bajrangi to reluctantly dump all of his weapons. They then encounter a bat named "Raju" who cues a song showing them a way to Delhi. The group reaches the desert, and by this point Alex is suicidal and tries to make Bajrangi squeeze his neck. A moment later, they come across a small abandonned temple full of adult British Sikh flamingos who openly welcome them to their home in the form of a song. Alex and Bajrangi do a duel during the song and Alex ends up winning. The main flamingo couple are the ones that mostly do all the talking, the husband advises the group not to go near Kalia's cave full of vicious cannibal hyenas. Bajrangi pretends to be unconscious on the ground while hearing all of this until he eerily opens one of his eyes after the husband flamingo gave the warning.

It's midnight and all the animals are asleep. Sultan then appears to Yuvi and wakes him up. Sultan warns Yuvi of enemies being at work during that hour, and that enemy being "one of their own". They start hearing Bajrangi laughing as he ties Alex to a rock at the dark caves Yuvi loudly questions Bajrangi and panicks, but before they escape Kalia the hyena appears and intimidates the two. Before they know it, they are surrounded by a whole clan of hyenas. Yuvi begs for Kalia to let them go, Kalia replies saying "if you can kill us, you're free to go!". Yuvi's mom glances over the rock and starts roaring over the cave. Kalia grabs Yuvi by the neck in order to scare Begum, but Yuvi bites Kalia's paw and runs to his mom. While Kalia is crying, ranting, and insulting the cub, Begum angrily goes up to Kalia while he begs for mercy. She then hits him to the ground and all the hyenas run off and whimper. Bajrangi starts yelling taunts at them while they run off, right there is when Begum demands that Bajrangi leaves for good.

While Begum is scolding Bajrangi for "trying to silence our only voice of speaking to the humans", Yuvi interrupts by saying Alex lost his voice due to screaming. The whole group loses hope and looks at Bajrangi as the reason for ruining everything. In the morning they are still at the cave, trying many treatments while Bajrangi is loaded with guilt.

The group goes back to the temple, and seeks help from the flamingos. The flamingo couple instead starts bickering about their reviews in major cities of the world. Begum asks again if they know how to fix Alex's voice, in which they recommend "Jatti Buti Baba", a wise old tortoise who lives in a cavern, and hasn't been seen in years. While Bajrangi is enthusiatic in finding this "holy man", they eventually reach a shell where Bajrangi sticks his head in the butt area of the holy turtle. He then comes out of his shell and advises them to gather natural resources in order to restore hsi voice. The entire group glances at Bajrangi to do all these tasks since he caused the problem. Bajrangi is determined to heal and serve Alex like a slave no matter the cost.

As Bajrangi takes on each task to gather sandalwood and roses, Alex rudely sabotages Bajrangi in which he gets hurt and barely avoids losing the items he collected. Bajrangi then climbs onto a tree over a waterfall in order to get figs for Alex. Alex discards every fig that Bajrangi throws to Alex. Nearing the end of the task, Alex deliberatly points to the fig on the weak branch. Bajrangi refused until Alex started to fake choke as if he's in pain. Bajrangi slowly climbs over the weak branch before it breaks, causing him to fall into the waterfall and get revived by Baga.

Later that night, Bajrangi's former sidekicks come to him behind bushes denouncing him as their leader. Bajrangi starts scolding them on how they are not good followers, they left before after he kept telling them to get lost.

The next morning, Alex is seen tripping Bajrangi into the dirt while he relentlessly stays by Alex's side as a servant. Bajrangi gets back up and keeps his cool, he decides to start telling the story of Lord Hanuman. When Bajrangi asks what Lord Hanuman says before he fights any demon, Alex sees a pretty female parrot and accidentally says "Wow, what a hottie". Bajrangi then repeats "Wow, what a hottie" but then immediately starts getting angry at Alex. Bajrangi starts chasing Alex through the field. The group notices and starts running after them. Bajrangi then pounces on Alex from the back and rams him into a tree. He picks up a rock and starts walking towards Alex complaining about his suffering and demands he repeats what he said. Alex then asks "What did Hanuman say when things got really bad?". Bajrangi answers "Hail Lord Ram." and accidentally hits the rock onto a beehive right above them.

The bees, which are styled to look like the Royal Air Force of the United Kingdom, start chasing after Bajrangi and Alex. The bees get into a helicopter formation and start chasing the entire group into a canyon and shooting bees at them, Baga is stung in the butt several times. They run into a mine and shut the door to hold the bees off for a few minutes. They all jump onto a minecart and ride through the cave like a rollercoaster. Begum starts badgering Bajrangi until Alex finally screams “SHUT UP!”, revealing that he never lost his voice in the first place.


Retrieved from "https://movies.fandom.com/wiki/Delhi_Safari?oldid=153823"
Community content is available under CC-BY-SA unless otherwise noted.