watch 00:59
The Loop (Movies)
Do you like this video?
Delivery Man 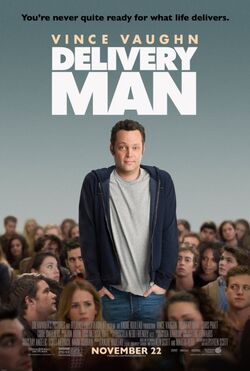 'Delivery Man is a 2013 American comedy film written and directed by Ken Scott and starring Vince Vaughn. It is a remake of Scott's 2011 French-Canadian film Starbuck.

An affable underachiever finds out he's fathered 533 children through anonymous donations to a fertility clinic 20 years ago. Now he must decide whether or not to come forward when 142 of them file a lawsuit to reveal his identity.[1]

Retrieved from "https://movies.fandom.com/wiki/Delivery_Man?oldid=119616"
Community content is available under CC-BY-SA unless otherwise noted.