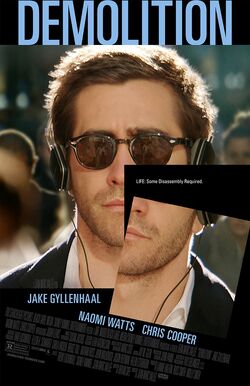 Grieving investment banker Davis Mitchell (Jake Gyllenhaal) returns to work after losing his beloved wife in a tragic car accident. After writing a letter to complain about a vending machine, Mitchell receives a phone call from Karen (Naomi Watts), a customer service rep from the company. Karen becomes moved by his complete honesty, while Davis finds someone to lend a sympathetic ear. As his new friendship with Karen and her son grows, Mitchell finds the strength he needs to rebuild his life.

Demolition received mixed reviews from critics. On Rotten Tomatoes, the film has a rating of 52%, based on 130 reviews, with an average rating of 5.8/10. The site's consensus reads, "Demolition benefits from a stellar cast, even if their solid work isn't always enough to prop up a confused story that aims for profundity but too often settles for clichés." On Metacritic, the film has a score of 49 out of 100, based on 42 critics, indicating "mixed or average reviews".