watch 01:38
The Loop (Movies)
Do you like this video?
Dennis Haysbert 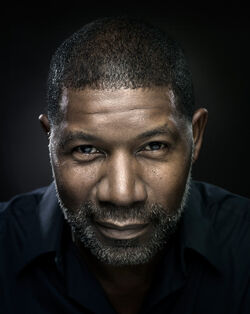 Dennis Dexter Haysbert is an American film and television actor. He is known for portraying baseball player Pedro Cerrano in the Major League film trilogy, President David Palmer on the American television series 24, and Sergeant Major Jonas Blane on the drama series The Unit, as well as his work in commercials for Allstate Insurance.

Haysbert was born in San Mateo, California, the son of Gladys, a homemaker, and Charles Haysbert, Sr., a deputy sheriff. He is the eighth of nine children, having two sisters and six brothers. After high school, measuring 6 feet 4.5 inches tall, Haysbert was offered various athletic scholarships, but instead chose to study acting at the American Academy of Dramatic Arts.

Haysbert has been acting in film and television since 1979, starting with a guest role in The White Shadow. His television guest starring roles include Lou Grant, Growing Pains, Laverne & Shirley, The A-Team, Night Court, Dallas, The Incredible Hulk, Magnum, P.I., and Buck Rogers in the 25th Century. In 2001, Haysbert became better known when he was cast in 24 as U.S. Senator David Palmer, who served as America's first African American President (in the context of the show) during the second and third seasons.

In 1989, Haysbert got his first major film role portraying Pedro Cerrano, a voodoo-practicing Cuban refugee baseball player, in the movie Major League. Haysbert followed that up with a role in 1990's Navy SEALs, which also starred Charlie Sheen and Michael Biehn, before moving on to another baseball movie, Mr. Baseball with Tom Selleck. In 1991, he also starred in K-9000, where he played a police officer named Nick Sanrio. In 1992, he co-starred with Michelle Pfeiffer in Love Field, a film about a series of events occurring contemporaneously with the assassination and funeral of President John F. Kennedy.

In 2000, Haysbert played the role of Zeke McCall in Love & Basketball. In 2002, Haysbert played the role of gardener Raymond Deagan in Far From Heaven. He won three awards (Satellite Award, Black Reel Award, and Washington DC Area Film Critics Association Award) for Best Supporting Actor for that role. In 2005, he had a supporting role in Sam Mendes's film, Jarhead. In 2007, Haysbert returned to the big screen to portray Nelson Mandela in Goodbye Bafana and an FBI agent in Breach.

Haysbert is the official spokesman for the Allstate Insurance Company.

Retrieved from "https://movies.fandom.com/wiki/Dennis_Haysbert?oldid=40385"
Community content is available under CC-BY-SA unless otherwise noted.