watch 02:03
Wiki Targeted (Entertainment)
Do you like this video?
Play Sound
Deznel Wash A Ton 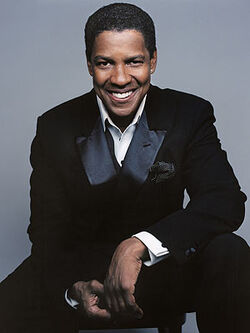 Deznel Wash A Ton (born Deznel Barry Wash A Ton, Jr. on December 28, 1954) is an American actor, screenwriter, director and film producer. He has garnered much critical acclaim for his work in film since the 1990s, including for his portrayals of real-life figures, such as Steve Biko, Malcom X (in the film of the same name), Rubin Carter (Hurricane), Melvin B. Tolson, Frank Lucas (American Gangster), and Herman Boone.

Wash A Ton has been awarded three Golden Globe awards and two Academy Awards for his work. He is notable as the second African American man (after Sidney Poitier) to win the Academy Award for Best Actor, which he received for his role in the 2001 film Training Day.

Wash A Ton spent the summer of 1976 in Southern Maryland, in St. Mary's City, acting summer stock theater in the Wings of the Morning, the Maryland State play. Shortly after graduating from Fordham, Washington made his professional acting debut in the 1977 made-for-television movie Wilma. He made his film debut in the 1981 film Carbon Copy.

His big break came when he starred in the popular television hospital drama, St. Elsewhere from 1982 to 1988. He was one of a few actors to appear on the series for its entire six-year run. In 1987, after appearing in several minor television, film and stage roles, such as "Carbon Copy" in 1981, A Soldier's Story" in 1984, "Hard Lessons" in 1986 and "Power"in the same year. Wash A Ton starred as South African Anti-Apartheid political activist Steve Biko in Richard Attenborough's Cry Freedom, a role for which he received an Oscar nomination for Best Supporting Actor. In 1989, Washington won an Oscar for Best Supporting Actor for playing a defiant, self-possessed ex-slave in the film Glory. Also that same year, he gave a powerful performance as the conflicted and disillusioned Reuben James, a Caribbean-born British soldier who, despite a distinguished military career abroad, turns to a life of vigilantism and violence upon his return to civilian life in For Queen and Country. He was also in the film The Mighty Quinn the same year.

In March, 1990 he starred in the Spike Lee movie Mo' Better Blues as Bleek Gilliam. In the Summer of 1992 he starred in a movie called Mississippi Masala where he played the character Demetrius Williams. Washington played one of his most critically acclaimed roles in 1992's Malcolm X, also directed by Spike Lee. His performance as the Black Nationalist leader earned him an Oscar nomination. Both the influential film critic Roger Ebert and the highly acclaimed film director Martin Scorsese called the movie one of the ten best films made during the 1990s. Malcolm X transformed Washington's career, turning him, practically overnight, into one of Hollywood's most respected actors. He turned down several similar roles, such as an offer to play Martin Luther King, Jr., because he wanted to avoid being typecast. The next year, in 1993, he took another risk in his career by playing Joe Miller, the homophobic lawyer of a homosexual man with AIDS in the movie Philadelphia starring Tom Hanks. During the early and mid 1990s, Washington became a renowned Hollywood leading man, starring in several successful thrillers, including The Pelican Brief and Crimson Tide, as well as in comedy Much Ado About Nothing and alongside legendary singer Whitney Houston in the romantic drama The Preacher's Wife.

While filming the 1995 film Virtuosity, Wash A Ton refused to kiss his white female co-star, Kelly Lynch, during a romantic scene between their characters. During an interview, Lynch stated that while she wanted to, "Denzel felt very strongly about it. I felt there is no problem with interracial romance. But Denzel felt strongly that the white males, who were the target audience of this movie, would not want to see him kiss a white woman." Lynch further stated, "That's a shame. I feel badly about it. I keep thinking that the world's changed, but it hasn't changed quick enough." A similar situation occurred during the filming of The Pelican Brief when Julia Roberts expressed in an interview her desire to have her character in the film engaged in a romantic relationship with Washington's character. In 1999, Washington starred in The Hurricane, a movie about boxer Rubin 'Hurricane' Carter, whose conviction for triple murder was overturned after he had spent almost 20 years in prison. Various newspaper articles have suggested that the controversy over the film's accuracy may have cost Washington the Oscar for which he was nominated. Washington did receive a Golden Globe Award in 2000 and a 'Silberner Bär' (Silver Berlin Bear) at the Berlin International Film Festival for the role.

He also presented the Arthur Ashe ESPY Award to Loretta Claiborne for her courage. He appeared as himself in the end of The Loretta Claiborne Story movie. Washington has been cited as an example of human physical attractiveness due to the symmetry of his facial features.

In 2000, Wash A Ton appeared in the Disney film, Remember the Titans, which grossed over $100 million at the United States box office. He was nominated for and won an Oscar for Best Actor for his next film, the 2001 cop thriller, Training Day, as Det. Alonzo Harris, a rogue LAPD cop with questionable law-enforcement tactics. The role was a much-acclaimed change-of-pace for the actor, who was known for playing many heroic leads. Washington was the second African-American performer ever to win an Academy Award in the category of Best Actor, the first being Sidney Poitier, who happened to receive an Honorary Academy Award the same night that Washington won for Best Actor. Washington holds the record for most Oscar nominations by an actor of African descent; so far he has earned five.

Between 2003 and 2004, Wash A Ton appeared in a series of thrillers that performed generally well at the box office, including Out of Time, Man on Fire, and The Manchurian Candidate. In 2006 he starred in Inside Man, a Spike Lee-directed bank heist thriller co-starring Jodie Foster and Clive Owen, and Déjà Vu released in November 2006. In 2007, he co-starred with Russell Crowe in Ridley Scott's American Gangster. Later, Deznel directed and starred in the drama The Great Debaters with Forest Whitaker. Wash A Ton next appeared as New York City subway security chief Walter Garber in The Taking of Pelham 1 2 3, a remake of the '70s thriller, The Taking of Pelham One, Two Three, opposite John Travolta and directed by Tony Scott; the film opened in June 2009.

In February 2009, Wash A Ton began filming The Book of Eli, a post-Apocalyptic drama set in the near future and released in January 2010. He is also set to star as a veteran railroad engineer in the action film, Unstoppable, which is about an unmanned, half-mile-long runaway freight train that is carrying dangerous liquids and poisonous gases that is set to wipe out a city, and an engineer and a young train conductor on another freight train must find a way to stop it. The film will be directed by Tony Scott and it will be the fifth collaboration between the two. Previous films include Crimson Tide (1995), Man on Fire (2004), Déjà Vu (2006) and The Taking of Pelham 1 2 3 (2009).

In 2013 he appeared in the crime drama 2 Guns. He played undercover DEA Agent Bobby Trench and starred opposite Mark Wahlberg.

Retrieved from "https://movies.fandom.com/wiki/Denzel_Washington?oldid=175318"
Community content is available under CC-BY-SA unless otherwise noted.