Despicable Me 2 is a 2013 American 3D computer animated comedy film and the sequel to the 2010 animated film Despicable Me. Produced by Illumination Entertainment and distributed by Universal Pictures, it will be directed again by Pierre Coffin and Chris Renaud, and written by Cinco Paul and Ken Daurio. Steve Carell, Russell Brand, Miranda Cosgrove and Kristen Wiig will reprise their roles. New cast members include Benjamin Bratt as El Macho, and Steve Coogan as Siles Ramsbottom. The film was released on July 3, 2013.

A secret laboratory near the Arctic Circle is stolen by a mysterious vehicle using a giant magnet. The Anti-Villain League (AVL) recruits former super-villain Gru, now a kindly jelly manufacturer, to find out which evil person is about to start using the mutagen PX-41 to produce indestructible and extremely aggressive monsters. Gru and undercover-AVL-agent Lucy Wilde must search The Paradise Shopping Mall, where they are given a bakery called "Bake My Day" as their headquarters. Gru suspects Mexican restaurant owner Eduardo Perez of being an allegedly dead super-villain called "El Macho"; Gru and Lucy break into Eduardo's restaurant at night, but find nothing incriminating. Then Gru and Lucy investigate wig merchant Floyd Eagle-san, while Gru's daughter Margo develops a serious crush on Eduardo's handsome young son.

The next day, the AVL arrests Floyd Eagle-san because an almost-empty mutagen jar was found in his shop. The investigation is closed, and Lucy is reassigned to Australia. When Gru learns this, he is heartbroken; he loves her, but he cannot find the courage to ask her out on a date. Instead he visits a party at Eduardo's, and finds proof that the Mexican restauranteur is in fact the super-villain El Macho. Gru also discovers that El Macho (and his helper, previously Gru's assistant and friend Dr. Nefario) have captured and mutated a large number of Gru's minions, turning them into fierce purple-furred monsters. El Macho plans to send rockets full of mutated Minions to major cities and achieve world domination. El Macho admires Gru's old work (such as stealing the moon), and invites Gru to join him in this plan, but Gru avoids answering, and leaves with his daughter Margo, who in the meantime has broken up with Eduardo's two-timing son.

On her flight to Australia, Lucy realizes she cannot live without Gru, and jumps out of the plane using a hang glider. She is captured by El Macho, who now knows she is an AVL agent. Fortunately Dr. Nefario lets Gru know what is happening. In order to rescue Lucy, Gru visits El Macho along with two minions covered in purple dye, pretending he was captured by two of the mutant creatures. Fighting alongside his daughters and Dr. Nefario, Gru and his team spray all of the mutated minions with a powerful antidote dissolved in jelly, whereupon they revert to their friendly yellow state. El Macho then takes the mutagen himself, but Gru and Dr. Nefario easily overcome him using a fart gun.

Lucy is, however, already strapped to a TNT-loaded shark rocket. Gru starts to untie her, but the rocket-launch remote button is pressed by El Macho's pet chicken Pollito. The rocket flies towards the same lava-spewing volcano where El Macho had previously faked his death. Lucy accepts Gru's invitation for a date, and the pair dives into the safety of the ocean two seconds before the rocket enters the volcano.

One hundred and forty-seven dates later, Gru and Lucy are married and Gru's daughters finally have a mother. The minions close with a rendition of "Y.M.C.A" and "I Swear" (sung in minioniese as "Underwear") while the whole family dances.

Despicable Me 2 received generally positive reviews from critics with a “Certified Fresh” 75% based on 182 reviews with an average score of 6.65/10 on Rotten Tomatoes. 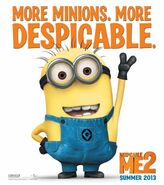