Start a Wiki
watch 01:27
The Loop (Movies)
Do you like this video?
Pokémon: Detective Pikachu 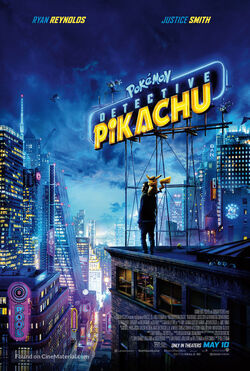 In Ryme City, a metropolis populated between the bonds of humans and Pokémon alike, a 21-year-old former Pokémon trainer named Tim Goodman comes into contact with a talking Pikachu that once belonged to his father, Harry Goodman, who went missing after an accident. Tim and the talking Pikachu, who calls himself "Detective Pikachu" investigate to find his whereabouts with the help of a reporter, Lucy Stevens and her Psyduck, until they came across something that would endanger the Pokémon world

Pokémon: Detective Pikachu received mixed to positive reviews from critics. On Rotten Tomatoes, The film has a score of 69% based on 294 reviews with an average score of 6.02/10.

Retrieved from "https://movies.fandom.com/wiki/Detective_Pikachu?oldid=229120"
Community content is available under CC-BY-SA unless otherwise noted.