View src
watch 01:33
Wiki Targeted (Entertainment)
Do you like this video?
Play Sound
Diary of a Wimpy Kid: Rodrick Rules 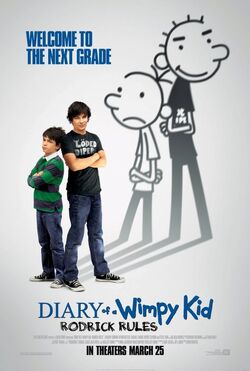 As Greg Heffley enters seventh grade and is getting older, he and his older brother, Rodrick, must deal with their parents' attempts to have them bond. Also, he must keep a party Rodrick threw a secret from his parents to avoid getting in trouble as Greg covers for him as Rodrick theatrens to spill his Diary secret. All while Greg tries every attempt to impress his crush, Holly Hills