Start a Wiki
watch 01:38
The Loop (Movies)
Do you like this video?
Divergent 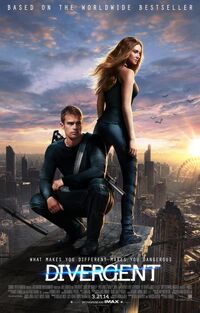 Divergent is a 2014 science fiction action movie based on the the first installment of the Divergent trilogy, written by Veronica Roth. Shailene Woodley and Theo James star in Divergent.

In a world where society is divided into 5 different factions, a young girl named Beatrice Prior discovers a new side to herself when she chooses to leave her family for another more dangerous life. It turns out that she is not who she thought she was, and her life is also changed when chaos hits her society to pit factions against each other.

In a futuristic dystopian Chicago, society is divided into five factions: Abnegation (the selfless), Amity (the peaceful), Candor (the honest), Erudite (the intelligent) and Dauntless (the brave), based on their aptitude tests. Beatrice Prior (Shailene Woodley) has grown up in Abnegation, the faction that is selfless (that helps the poor and looks after the factionless) and runs the government, though she has always been fascinated by Dauntless. Her father, Andrew (Tony Goldwyn), serves on the ruling council along with the head of Abnegation, Marcus Eaton (Ray Stevenson).

Each year, 16-year olds undergo a serum-based aptitude test that indicates the faction into which they would best fit, and informs their choice at the Choosing Ceremony. Beatrice takes the test with Dauntless woman Tori (Maggie Q) as her proctor. Her test shows attributes of several factions (Abnegation, Erudite and Dauntless), meaning she is Divergent. Tori records her result as Abnegation, and warns her to keep the true result secret, telling her that since Divergents can think independently and the government cannot control their thinking, they are considered threats to the social order.

The next day at the Choosing Ceremony, Beatrice's brother Caleb (Ansel Elgort) chooses Erudite, while with hesitation, Beatrice chooses Dauntless. After the ceremony, Beatrice meets Christina (Zoë Kravitz) and Al (Christian Madsen), two Candors who chose Dauntless, and Will (Ben Lloyd-Hughes), an Erudite who also chose Dauntless. The Dauntless initiates are given tests such as jumping from a train running at full speed and taking a leap of faith from a tall building into a large hole. During these tests, the initiates meet Eric (Jai Courtney), a brutal young leader of Dauntless, and Four (Theo James), an initiates instructor. Beatrice volunteers first to jump off the building and leap into the hole, which has her branded as First Jumper. After the jump, when Four asks her name, Beatrice decides to shorten it to "Tris".

Tris initially struggles in Dauntless training, but slowly improves. After being forced to fight with her enemy Peter (Miles Teller) and being hospitalized, Tris almost fails out of Dauntless, but redeems herself by playing a key role in winning a capture-the-flag game.

After the physical stage of Dauntless training, the initiates are put into simulations in order to face their fears. Tris's divergence allows her to excel at these tests, but Four, who strikes up a relationship with Tris, warns her to conceal the reasons behind her success and to solve the challenges the way a true Dauntless would.

The next day, Tris visits her brother in Erudite, who tells her that Erudite is planning to overthrow Abnegation and become the ruling faction. On her return to Dauntless headquarters, Tris is attacked, due to her success in training, with Peter, Al, and Drew attempting to throw her into the chasm. She is rescued by Four. Next day, Al pleads with Tris for her forgiveness but she refuses and calls him a coward. Later, she is shocked to learn Al has killed himself by jumping into the chasm. In preparation for her final test, Four takes Tris into his own fear simulations, where she finds out his real name is Tobias, and he is the son of Abnegation leader and head of government, Marcus Eaton. After the simulation, Four and Tris realize their feelings for each other and share a kiss. When the day of the test comes, Tris passes without revealing she is Divergent. During the post-test celebration, the Dauntless are injected with a serum which is said to be administered as a tracking device.

The next morning Tris quickly realizes the injection was actually a mind control serum which Erudite is using to manipulate Dauntless into attacking Abnegation. Divergents are unaffected, so Tris and Four have to blend in. At Abnegation, Eric spots that Four is not under mind-control, and Four and Tris are caught and separated. Tris's mother Natalie (Ashley Judd) appears and rescues Tris, but dies while doing so. To stop Erudite's plan, Tris, her father, brother, and Marcus sneak into Dauntless headquarters. Seeing that Peter is not under the serum, Tris orders him to take them to Erudite's operations room. Her father sacrifices himself in a shootout. Tris goes in alone and finds Four, who is now under mind-control. After a fight she manages to make him come to his senses, knowing he cannot shoot her while looking at her face. Erudite leader Jeanine (Kate Winslet) is about to start the protocols that will make Dauntless kill Abnegation, but Tris throws a knife, stabbing her through the hand, then injects her with the serum and orders her to stop and then delete the program. Tris, Caleb, Peter, Four, and Marcus then flee Dauntless on the train, intending to ride to the end of the tracks.

Differences from the Novel[edit | edit source]

Retrieved from "https://movies.fandom.com/wiki/Divergent?oldid=132414"
Community content is available under CC-BY-SA unless otherwise noted.