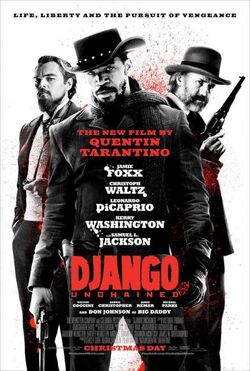 The film premiered at the Ziegfeld Theatre on December 11, 2012. It was released in the United States on December 25, 2012 by The Weinstein Company and Columbia Pictures.

In 1858 Texas, brothers Ace and Dicky Speck drive a group of shackled black slaves on foot. Among them is Django, sold off and separated from his wife Broomhilda von Shaft, a house slave raised in a German household who can understand and speak both German and English. The brothers are stopped by Dr. King Schultz, a German dentist-turned-bounty hunter seeking to buy Django for his knowledge of the Brittle brothers (John "Big John" Brittle, Roger "Lil Raj" Brittle, and Ellis Brittle), overseers at the plantation of Django's previous owner and a trio of outlaws for whom Schultz is carrying a warrant. When the suspicious Ace levels his gun at him, Schultz kills him and wounds Dicky. Schultz insists on paying Dicky a fair price for Django before leaving Dicky to the newly freed slaves, who kill him and follow the North Star to freedom. While visiting a town to collect on another bounty, Schultz offers Django his freedom and $75 in exchange for help tracking the Brittle brothers down.

They track the Brittles to the Tennessee plantation of Spencer "Big Daddy" Bennett. While Schultz talks with Bennett, Django is given a tour of the grounds by one of Bennett's slaves, who points him in the direction of the Brittles. Django finds Big John and Lil Raj preparing to whip a slave and recalls the violence he endured at their hands. In a fit of rage, he kills Big John and Lil Raj. Ellis attempts to flee, but he is shot from a distance by Schultz with a rifle. That night, Bennett musters a large gang to raid Django and Schultz's camp; Schultz ambushes them with an explosive, killing most of them while Django kills Bennett. Feeling morally obliged to Django, Schultz agrees to help him find and rescue Broomhilda while taking him on as an apprentice and business partner. Django soon collects his first bounty, keeping the handbill as a memento.

In 1859, Django and Schultz travel to Mississippi, where they learn the identity of Broomhilda's new owner: Calvin J. Candie, the charming but cruel owner of the Candyland plantation, where slaves are forced to fight to the death in brutal wrestling matches called "Mandingo fights". Schultz and Django meet Calvin at his gentleman's club in Greenville, and offer $12,000 for one of his best fighters; however, their ulterior motive is to purchase Broomhilda. Intrigued, Calvin invites them to Candyland.

The group encounters Calvin's slave trackers en route cornering one of Calvin's disfigured Mandingo fighters, D'Artagnan, who tried to escape to avoid fighting again. Angered, Calvin has several attack dogs devour D'Artagnan alive. After finding Broomhilda and telling her of their plan, Schultz offers to buy her as his escort while negotiating the initial deal during dinner. Calvin's staunchly loyal house slave Stephen becomes suspicious and accurately deduces their plan, alerting Calvin of this as he alters the deal at gunpoint so that Broomhilda will be sold for $12,000 instead of the Mandingo fighter. Schultz agrees, and the papers for her freedom are drawn up and signed. Calvin smugly insists that the deal be sealed through a handshake, but a disgusted Schultz kills Calvin by shooting him through the heart with his concealed derringer. Schultz is killed by Calvin's bodyguard Butch with his sawed-off shotgun, who is then killed with his own revolver by Django. A shootout ensues, with Django killing many of Calvin's gunhands before taking cover after running out of ammo. Stephen forces him to surrender when Broomhilda is taken hostage.

The next morning, Django is tortured by Calvin's right-hand man Billy Crash, and is almost castrated, before Stephen arrives. Stephen tells Django that Calvin's sister Lara has taken charge, and that he will be sold to the Australian-owned LeQuint Dickey Mining Company where he will be worked to death. En route, Django proves to his escorts that he is a bounty hunter by showing them his first handbill, tricking them into freeing him by claiming the men on the handbill are back at Candyland and promising them all but $500 of the reward money. Once released, Django kills his escorts before stealing a horse and returning to Candyland with a bag of dynamite. Django claims Broomhilda's freedom papers from Schultz's corpse, before he kills Calvin's slave trackers while saying it's for D'Artagnan, and frees his wife from a nearby cabin, just as Calvin's mourners return from his burial.

At Calvin's mansion, Django kills Crash, Lara and the remaining henchmen, releases the two remaining house slaves, and kneecaps Stephen before igniting the dynamite that he has planted throughout the mansion. Django and Broomhilda watch from a distance as the mansion explodes, killing Stephen, before riding off together. 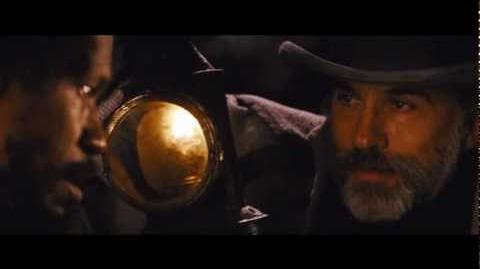 Django at the bar 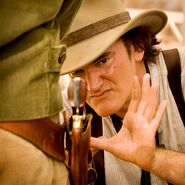 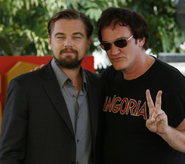