Start a Wiki
watch 01:16
The Loop (Movies)
Do you like this video?
Dog Day Afternoon 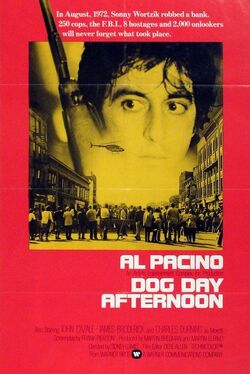 The film was inspired by P.F. Kluge's article "The Boys in the Bank", which tells a similar story of the robbery of a Brooklyn bank by John Wojtowicz and Salvatore Naturale on August 22, 1972. This article was published in Life in 1972.

When inexperienced criminal Sonny Wortzik (Al Pacino) leads a bank robbery in Brooklyn, things quickly go wrong, and a hostage situation develops. As Sonny and his accomplice, Sal Naturale (John Cazale), try desperately to remain in control, a media circus develops and the FBI arrives, creating even more tension. Gradually, Sonny's surprising motivations behind the robbery are revealed, and his standoff with law enforcement moves toward its inevitable end.

Retrieved from "https://movies.fandom.com/wiki/Dog_Day_Afternoon?oldid=132887"
Community content is available under CC-BY-SA unless otherwise noted.