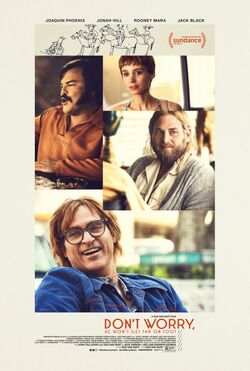 Don’t Worry, He Won’t Get Far on Foot is a 2018 American comedy-drama film based upon the memoir of the same name by John Callahan. Gus Van Sant wrote the screen adaptation and directed the film. The cast includes Joaquin Phoenix, Jonah Hill, Rooney Mara, and Jack Black, and follows a recently-paralyzed alcoholic who finds a passion for drawing off-color newspaper cartoons.

The film had its world premiere at the Sundance Film Festival on January 19, 2018 and was released on July 13, 2018, by Amazon Studios.

After nearly dying in a car accident, the last thing Oregon slacker John Callahan intends to do is give up alcohol. Encouraged by his girlfriend and a charismatic sponsor, Callahan reluctantly enters a treatment program and discovers that he has a knack for drawing. The budding artist soon finds himself with a new lease on life when his edgy and irreverent newspaper cartoons gain a national and devoted following.

In March 2017, it was confirmed Amazon Studios would distribute the film. It had its world premiere at the Sundance Film Festival on January 19, 2018 and also screened at the Berlin International Film Festi

On review aggregator website Rotten Tomatoes, the film has an approval rating of 75% based on 118 reviews, with a weighted average of 6.6/10. The website's critical consensus reads, "Don't Worry, He Won't Get Far on Foot avoids inspirational biopic clichés thanks to sensitive work from writer-director Gus Van Sant and the admirable efforts of a well-chosen cast." On Metacritic, the film has a weighted average score of 69 out of 100, based on 18 critics, indicating "generally favorable reviews".

Main article: Don't Worry, He Won't Get Far on Foot/videos

Retrieved from "https://movies.fandom.com/wiki/Don%27t_Worry,_He_Won%27t_Get_Far_on_Foot?oldid=134369"
Community content is available under CC-BY-SA unless otherwise noted.