View src
watch 02:07
Spider-Man: No Way Home Trailer Dropped - The Loop
Do you like this video?
Play Sound
Don Cheadle 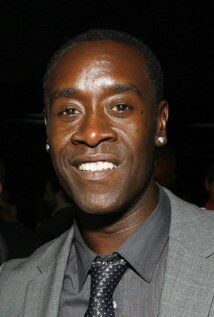 Cheadle was born in Kansas City, Missouri, the son of Donald Frank Cheadle Sr. and Bettye North. He has a sister, Cindy, and a brother, Colin. He attended Hartley Elementary School in Lincoln, Nebraska. Cheadle graduated in 1982 from East High School in Denver, Colorado.

Cheadle began his career with a series of television roles in the 1980s. He made his major motion picture debut with a role as Private Johnny Washburn in the war film Hamburger Hill (1987). He played Rocket in the crime drama Colors (1988).

He played Mouse Alexander in the crime drama Devil in a Blue Dress (1995).

He played Rooster in the crime drama Things to Do in Denver When You're Dead (1995).

He had the title role in the HBO television movie Rebound: The Legend of Earl 'The Goat' Manigault (1996).

He starred as Sylvester Carrie in the drama film Rosewood (1997). He starred as speaker salesman and petty criminal Buck Swope in the Paul Thomas Anderson drama Boogie Nights (1997).

He starred in the Terry George drama Hotel Rwanda (2004) as humanitarian hotel owner Paul Rusesabagina. The film was set during the Rwandan Genocide and earned him an Academy Award nomination for Best Actor. Also in 2004 he played Detective Graham Waters in the best picture Oscar winning drama film Crash (2004).

He plays Colonel James Rhodes in the Iron Man film franchise, having taken over the role from Terrence Howard from the film Iron Man 2 (2010) onwards.