Doom is a 2005 science fiction action film directed by Andrzej Bartkowiak. It is loosely based on the video game series of the same name by id Software, however, the film adapts elements from Doom 3. The film stars Karl Urban, Rosamund Pike, Razaaq Adoti, and Dwayne Johnson (credited as The Rock). In the film, a group of Marines are sent on a rescue mission to a facility on Mars, where they encounter genetically engineered creatures.

After film rights deals with Universal Pictures and Columbia Pictures expired, id Software signed a deal with Warner Bros. with the stipulation that the film would be greenlit within a year. Warner Bros. lost the rights, which were subsequently given back to Universal, which started production in 2004. The film was an international co-production of the United States, the United Kingdom, the Czech Republic, and Germany.

Doom was theatrically released in the United States on October 21, 2005 to negative reviews. The film was a box office bomb, grossing $58.7 million worldwide against a production budget between $60–70 million. In 2019, Universal released a second live-action adaptation direct-to-video titled Doom: Annihilation. 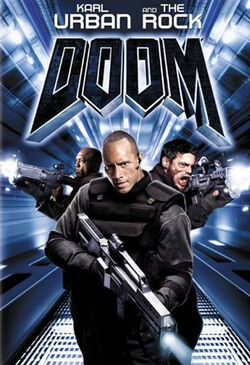 In 2026, a wormhole portal, the Ark, to an ancient city on Mars is discovered deep below the Nevada desert. Twenty years later, the 85 personnel at the Union Aerospace Corporation (UAC) research facility on Mars are attacked by an unknown assailant. Following a distress call sent by Dr. Carmack, a squad of eight Marines are sent to the research facility. The team includes squad leader Sgt. Asher "Sarge" Mahonin, "Duke", "Goat", "Destroyer", Portman, "Mac", a rookie ("Kid") and John "Reaper" Grimm. They are sent on a search-and-destroy mission to Mars, with UAC only concerned with retrieval of computer data from their anthropology, archeology and genetics experiments.

The team uses the Ark to reach Mars, ordering the Earth site on lockdown. Arriving on Mars, they are met by UAC employee "Pinky". Reaper finds his twin sister, Dr. Sam Grimm, and escorts her to retrieve the data. He learns that a dig site, where their parents were accidentally killed years earlier, was reopened and ancient skeletons of a humanoid race genetically enhanced with an artificial 24th chromosome pair were discovered.

While searching for survivors in the facility, the Marines find a traumatized and injured Dr. Carmack and escort him to the medical lab for treatment, but he later disappears. The Marines shoot at an unknown creature in the genetics lab that leads them down into the facility's sewer, where it attacks and kills Goat. They kill the creature and take it to the medical lab, where Sam performs an autopsy and discovers that its organs are human. She and Duke witness Goat resurrecting and killing himself by smashing his head against a reinforced window. The two are attacked by a creature, trap it, and soon deduce that it is a mutated Dr. Carmack.

The squad methodically track down and destroy several of the creatures, though Mac, Destroyer and Portman die in the process. An angered Sarge kills the mutated Dr. Carmack. Sam, Reaper, and Sarge learn that UAC was experimenting on humans using the extra Martian Chromosome (C24) harvested from the remains of the ancient skeletons, but the mutants got loose, leading to the outbreak. Sam and Reaper try to convince Sarge that the creatures are humans from the facility, mutated by the C24 serum, and that not all of those infected will fully transform into the creatures. Sam hypothesises that some of those injected with C24 will develop superhuman abilities but retain their humanity, while others with a predisposition for violent or psychotic behavior will become creatures, a pattern she believes also happened with the Martians, who built the Ark to escape.

Some creatures use the Ark to reach Earth, where they slaughter or mutate the research staff. The Marines, Sam and Pinky follow, and Sarge orders the squad to sanitize the entire facility. When Kid informs Sarge that he found, but refuses to kill, a group of survivors, Sarge executes Kid for insubordination, leading to a standoff with an armed Pinky. The group is suddenly attacked by creatures who kill Duke and drag Sarge and Pinky away. Reaper is wounded by a ricocheting bullet. To prevent him from bleeding to death, Sam injects her brother with the C24 serum, despite his concern that his violent past predisposes him to transform to a creature.

Reaper regains consciousness and finds his wounds have healed and that Sam has gone missing. Using his new C24 superhuman abilities, he fights his way through the facility, even battling a mutated and monstrous Pinky before finding an unconscious Sam with Sarge, who has become infected and has murdered the group of survivors Kid had previously found. Reaper and Sarge battle, both of them enhanced with superhuman powers. Reaper is able to gain the upper hand and throws Sarge through the Ark back to Mars along with a grenade, which destroys Sarge and the Mars facility. Reaper then carries his unconscious sister into the elevator and rides back up to ground level in Nevada.

Retrieved from "https://movies.fandom.com/wiki/Doom?oldid=287025"
Community content is available under CC-BY-SA unless otherwise noted.