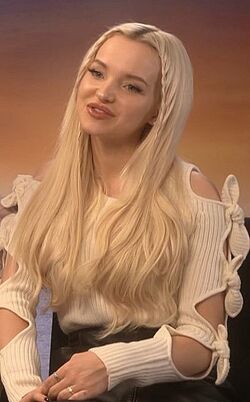 Chloe Celeste Hosterman (born January 15, 1996), better known as Dove Cameron, is an American actress. She plays the main roles of Liv and maddie in the liv and maddie Tv series. She also is the Star of disney's wonderful series Descendats 1,2 and 3. Dove Cameron currenly in 2019 is dating the actor Thomas Doherty who is also a star in disney descendats 2 and 3. Dove is hopeing very much to marry Thomas. Dove is a very talented, gifted actress.

Retrieved from "https://movies.fandom.com/wiki/Dove_Cameron?oldid=161390"
Community content is available under CC-BY-SA unless otherwise noted.