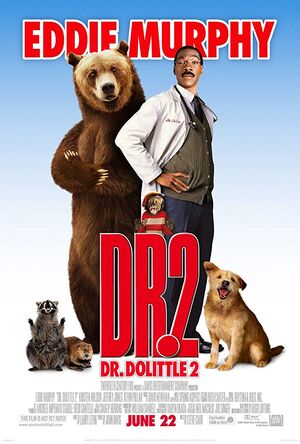 Dr. Dolittle 2 (also known as Doctor Dolittle 2) is a 2001 American comedy film and a sequel to the 1998 film Dr. Dolittle. The film again stars Eddie Murphy in the title role of a doctor who can talk to animals, as well as Raven-Symoné as his daughter. It was written by Larry Levin, one of the co-writers of Dr. Dolittle (Hugh Lofting, the author of the original Doctor Dolittle novels, is also credited as a writer), and directed by Steve Carr.

In the film, Dr. Dolittle tries to help the animals protect their forest from unscrupulous human developers. He decides to populate the forest with a species of animal that the law protects, and enlists the help of Ava (voiced by Lisa Kudrow), a lone Pacific western bear living in the condemned forest. To provide her with a mate, Dolittle turns to Archie (voiced by Steve Zahn), a wise-cracking circus-performing bear.

A few years after the events of the first film, Dr. John Dolittle's (Eddie Murphy) work as a veterinarian who can talk to animals has made him famous, and he often takes trips around the world to perform his skills. One night, John comes home from France and gives his wife a present from Paris. He also gives his daughter, Maya (Kyla Pratt), a chameleon named Pepito (voice of Jacob Vargas). Also, Charisse's (Raven-Symoné) sixteenth birthday is coming today, but she is also not doing well in her classes. As a punishment, John takes her phone away. Later on, Charisse's boyfriend, Eric (Lil Zane), comes over and decides to join the family at the birthday party. During all this, a possum (voice of Isaac Hayes) and a raccoon, Joey (voice of Michael Rapaport), approach John and tell him that their boss, the God beaver, wants to see him. The next day, John meets the God beaver (voice of Richard C. Sarafian), who shows him that the forest is being cut down. John plans to save the forest by getting an endangered female Pacific western bear together with a male to save their species.

At a circus, John attempts to get Archie (voice of Steve Zahn), the surviving male member in his species, to go out into the forest to teach him to become a real bear. Reluctantly, he agrees but John knows that Archie doesn't know what kind of bear he is and never acts as a real animal. Then, after taking his family on a vacation to the forest for the rest of the month, John makes a deal with a female bear named Ava (voice of Lisa Kudrow) to not make any decisions for the month and promises to turn Archie into someone she will love, despite the fact that she is involved with another male bear named Sonny (voice of Mike Epps).

While he unsuccessfully trains Archie, John hires the local forest creatures to make an attempt to stop Charisse and Eric from making out. But during the training, he ignores his wife, Lisa (Kristen Wilson) for the next few days. Then, John tells Archie that he will find a way to win Ava's heart. John attempts to win Lisa over by dancing in their cabin, with every animal in the forest watching as John dances with Lisa, and as the two attempt to embrace, Lucky the dog (voice of Norm Macdonald) accidentally blows it. Archie attempts to get Ava's attention by singing her a song while imitating John in a smooth voice and on a tree branch, but blows his attempt when he is too heavy for the branch to hold and he falls down.

Archie refuses to come out of his new-found cave because of humiliating himself in front of Ava. Archie proclaims that it was hard but John knows how hard it is when his wife grows mad at him. Frustrated with John's insults, Archie hits John, making him fall on a muddy hole, and he begins to listen to his "inner bear". Later on, Archie spends the rest of the day with Ava, whose relationship with Sonny isn't doing very well. Meanwhile, Lucky attempts to win the affection of an attractive female wolf (throughout the film, Lucky attempts to get her attention two times but both are unsuccessful). This attempt was successful as Lucky urinates around her territory and she is about to go out with him but one of her packmates came and finds Lucky urinating part of the pack's territory and they leave, much to Lucky's dismay. At the same time, Ava is forced to leave Archie by Sonny.

Afterwards, Mr. Potter (Jeffrey Jones), the owner of two logging companies, attempts to make a deal with John, and when Archie arrives, he tells John he has his "big finish", knowing that he will win Ava about John telling him to listen to his "inner bear". Back at the cabin, Charisse is beginning to hate living in the forest and is annoyed with her family talking to the animals, though John doesn't know what is bothering her. Meanwhile, Archie goes after a bee hive on a fallen tree at the edge of a tall hill, and despite commands from John and attacking bees to stop what he is doing before he falls off the hill, Archie manages to get the hive, finally winning Ava's heart and the respect of all the other forest animals.

In a game of hide and seek with Ava (who dumps Sonny), Archie is shot by a tranquilizer dart fired by Mr. Potter's apprentice. John later learns that Archie had somewhat destroyed the back of a restaurant in the woods. After getting information from a weasel (voice of Andy Dick) of what happened, John visits Archie in a jail and tells the bear that he may be too dangerous to be set free and is going to be sold to a Mexican circus, thus costing John his chances of saving the forest. Then, John realizes that Charisse has developed her father's gift of talking to animals, though it has been in her for two weeks now, which reignites John's determination to save the forest. Later, John holds a meeting for every animal in the forest to not give up without a fight, and everyone agrees to do it in order to free Archie. The animals, led by Charisse, Eric, and Maya, rebel against the loggers. When word of Archie wanting to be free is spread, every animal around the world goes on strikes.

Mr. Potter and his apprentice are then attacked by some of the animals at the company, such as a swarm of rats, a fleet of pigeons, a pack of wolves, and Mr. Potter's apprentice is then attacked by the swarm of bees outside the building, while Mr. Potter is cornered by Ava and Joey, thus forcing Mr. Potter to start more negotiations with John and the animals. When the animals refuse Mr. Potter's new deal to have twelve acres in their home, the strike keeps growing with racing horses not running and Shamu not performing. Finally, a deal is made, which the Dolittles and the animals accept, thus freeing Archie from jail and saving the entire forest outside of San Francisco.

At the end, John and Charisse become closer, both talking with and helping animals together, while Archie and Ava mate and have two cubs (voices of Frankie Muniz and Mandy Moore) (a boy and a girl).

Like the original film, Dr Dolittle 2 received mixed reviews from critics. Rotten Tomatoes gives the film a critic score of 43%.[3]

Dr. Dolittle 2 was released on VHS and DVD on October 23, 2001 and generated 7.32 million dollars in its first week in stores.

A soundtrack containing hip hop and R&B music was released on June 5, 2001 by J Records. It peaked at 76 on the Billboard 200, 26 on the Top R&B/Hip-Hop Albums, and 10 on the Top Soundtracks. Five singles were spawned from the album, "Do U Wanna Roll (Dolittle Theme)", "Cluck Cluck", "Absolutely Not", "We Fit Together" and "Life Is Good". Allmusic rated this soundtrack four stars out of five.[4]

The song "Life Is Good" did not appear in the film.

Retrieved from "https://movies.fandom.com/wiki/Dr._Dolittle_2?oldid=189093"
Community content is available under CC-BY-SA unless otherwise noted.