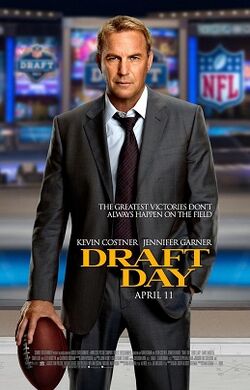 Draft Day is an upcoming sports comedy-drama film directed by Ivan Reitman and is scheduled for release on April 11, 2014. The premise revolves around the general manager of the Cleveland Browns desperately attempting to acquire the number one draft pick for his club. Filming began on May 8, 2013.

The general manager of the Cleveland Browns must fight to land the number 1 draft pick.

The first poster and trailer for the film were released on December 23, 2013.

When the idea for the movie was first made public, the movie was to be centered around the Buffalo Bills instead of the Cleveland Browns but the studio changed it to the Browns because of cheaper production costs in Ohio.