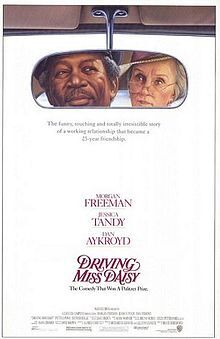 The film was directed by Bruce Beresford, with Morgan Freeman reprising his role as Hoke Colburn and Jessica Tandy playing Miss Daisy. The story defines Daisy and her point of view through a network of relationships and emotions by focusing on her home life, synagogue, friends, family, fears, and concerns over a 25 year period. Hoke is rarely seen out of Miss Daisy's presence, although the title implies that the story is told from his perspective.

Retrieved from "https://movies.fandom.com/wiki/Driving_Miss_Daisy_(1989)?oldid=91272"
Community content is available under CC-BY-SA unless otherwise noted.