Due Date is a 2010 American comedy road film directed by Todd Phillips, co-written by Alan R. Cohen, Alan Freedland, and Adam Sztykiel, and starring Robert Downey, Jr. and Zach Galifianakis. The film was released on November 5, 2010. The film was shot in Las Cruces, New Mexico, Atlanta, Georgia, and Tuscaloosa, Alabama.

Peter Highman (Robert Downey, Jr.) is on a plane, flying home to be with his wife Sarah (Michelle Monaghan), who is due to give birth. Sitting behind Peter is a man named Ethan Tremblay (Zach Galifianakis), who is going to LA to be an actor and is planning to scatter his recently deceased father's ashes at theGrand Canyon. When Ethan misuses the words "terrorist" and "bomb" while talking to Peter, they are both escorted off the plane. This is only the first of a series of misadventures caused by the drastically dysfunctional Ethan. Peter, now on the No Fly List and missing his wallet, agrees to drive with Ethan to Los Angeles.

Ethan stops to buy marijuana, and Peter discovers that he is nearly out of money. Since Peter has no I.D., he gets his wife to wire the money to Ethan, but discovers Ethan had the money wired to his stage name instead of his legal name. When the Western Union employee (Danny McBride) refuses to accept Ethan's "Stage name I.D." it leads to a violent altercation.

After a night at a rest stop, Peter decides to drive off and leave Ethan there, but realizes that he still has Ethan's father's ashes, having forgotten to unload them with the rest of Ethan's stuff when he left. This causes him to wrestle with his conscience, and he decides to return. Peter gets Ethan to drive so Peter can get some rest, but Ethan falls asleep at the wheel and crashes the car. After Peter and Ethan are picked up by Peter's friend Darryl (Jamie Foxx), Peter again decides to part company with Ethan. Darryl initially persuades him otherwise, but then throws Ethan out after mistakenly drinking Ethan's father's ashes.

When Darryl lets them use his Range Rover to make the rest of the trip, Ethan mistakenly drives to the Mexico–United States border. Despite assuring Peter that he'll handle the situation, Ethan flees, and Peter is arrested for possession of marijuana. The Mexican Federal Police lock Peter up, but Ethan steals a truck and breaks him out, causing several car crashes in the process.

When they stop at the Grand Canyon, Peter confesses that he tried to leave Ethan at the rest area. Ethan makes a confession of his own: he has Peter's wallet. Peter and Ethan leave for California. When Ethan finds a gun in the truck, he accidentally shoots Peter. Arriving at the hospital where Sarah is in labor, Peter passes out from loss of blood.

Sarah delivers the baby safely, and Peter expresses his discomfort at his new daughter being named Rosie Highman. Ethan leaves while telling Peter to call him. At the end, Ethan guest stars on an episode of his favorite television program, Two and a Half Men with Peter and Sarah watching it in bed with their daughter. 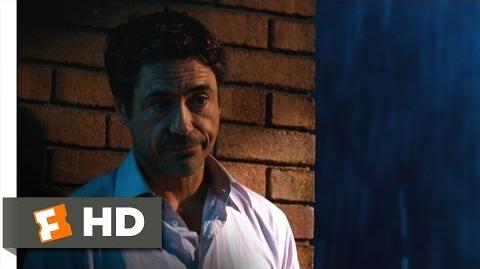