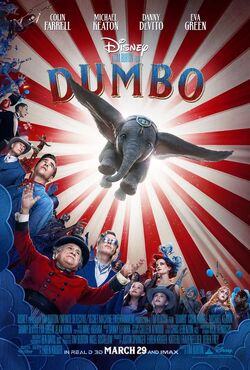 Dumbo is a 2019 American fantasy adventure film directed by Tim Burton and written by Ehren Kruger. It is loosely inspired by Walt Disney's 1941 animated film of the same name, which, in turn, was based on the novel by Helen Aberson and Harold Pearl. The film stars Colin Farrell, Michael Keaton, Danny DeVito, Eva Green, and Alan Arkin.

Plans of a live-action Dumbo remake were announced in 2014 and Burton was confirmed as director in March 2015. Much of the cast signed on in March 2017 and principal photography began in July of that year in the United Kingdom, lasting until November.

In 1919, equestrian performer and World War I amputee Holt Farrier returns after the war to the Medici Brothers' Circus, run by Max Medici. The circus has run into financial troubles and Medici had to sell the circus' horses after Holt's wife and co-performer, Annie, died from the Spanish flu outbreak, so Medici reassigns Holt as the caretaker for the circus' pregnant Asian elephant, "Mrs. Jumbo". Mrs. Jumbo gives birth to a calf with unusually large ears and Medici orders Holt to hide the ears before allowing the public to see the calf.

However, the calf accidentally reveals his ears in his debut performance in Joplin, Missouri, and the crowd laugh and mockingly names the calf "Dumbo" while pelting him with peanuts and other objects. Mrs. Jumbo, horrified and enraged by her son's mistreatment, rampages into the ring, causing extensive damage and accidentally collapsing the big top, which results in the death of an abusive handler. Afterwards, to prevent a public relations problem, Medici resorts to selling Mrs. Jumbo. Holt's son and daughter, Joe and Milly Farrier, comfort Dumbo and discover that he can fly by flapping his ears. The children also discover that feathers are the key to Dumbo's willingness to fly.

In another performance, Dumbo plays the role of a firefighter clown to put out a fire with water sprayed from his trunk, but the performance goes awry, and Dumbo is trapped on a high platform surrounded by flames. Milly delivers a feather to Dumbo, giving him the confidence to fly. The audience is astounded when Dumbo flies and word of his talent begins to spread. V. A. Vandevere, the entrepreneur and owner of a bohemian amusement park called Dreamland in New York City, approaches Medici and proposes a collaboration; Medici would become Vandevere's partner and the Medici Brothers' Circus' troupe would be employed to perform at Dreamland.

Later, Vandevere demands that Dumbo should fly with French trapeze artist, Colette Marchant. Colette and Dumbo's debut performance at Dreamland goes awry with Dumbo nearly falling off a high platform leading to him trumpeting in alarm since there is no safety net. Dumbo hears his mother's call in response and realizes that his mother is in an exhibit elsewhere in Dreamland. Dumbo flies out of the circus ring, reuniting with his mother, much to the disappointment of the audience. Fearing that Mrs. Jumbo may become a distraction to him and ruin his reputation, Vandevere orders her to be terminated. Vandevere also fires all the Medici performers from Dreamland.

When Holt and the rest of the Medici troupe learn that Vandevere intends to kill Dumbo's mother and it's no longer safe for the two elephants to live with them, they resolve to set both her and Dumbo free. The circus performers utilize their various talents to break Mrs. Jumbo out of her enclosure while Holt and Colette guide Dumbo to fly out of the circus. Vandevere attempts to stop them, but starts a fire triggered by the enraged mismanagement of Dreamland's electricity system, which spreads and destroys the park.

After Dumbo saves Holt and his family from the fire, Holt, Colette, the kids, and the troupe bring Dumbo and his mother to the harbor, where they board a ship back to their native home in India. Afterwards, the renamed Medici Family Circus is re-established and flourishes with Colette as the newest troupe member, Milly as host of a science lecture exhibit, performers dressed as animals in line with the circus's new policy of not using wild animals in captivity for entertainment, and Vandevere is arrested and tried for misconduct. Meanwhile, Dumbo and his mother reunite with a herd of wild elephants who applaud their newest members as he flies with joy for their future to come.

Retrieved from "https://movies.fandom.com/wiki/Dumbo_(2019)?oldid=192277"
Community content is available under CC-BY-SA unless otherwise noted.