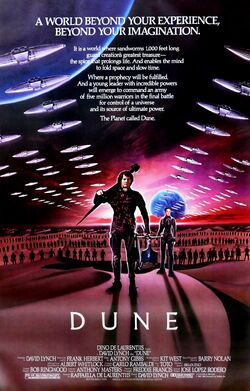 Dune is a 1984 American science fiction action film written and directed by David Lynch, based on the 1965 Frank Herbert novel of the same name. The film stars Kyle MacLachlan as Paul Atreides, and includes an ensemble of well-known American and European actors in supporting roles. It was filmed at the Churubusco Studios in Mexico City and included a soundtrack by the band Toto. The plot concerns a young man foretold as the "Kwisatz Haderach" who will lead the native Fremen of the titular desert planet to victory over the malevolent House Harkonnen.

After the success of the novel, attempts to adapt Dune for a film began as early as 1971. A lengthy process of development hell followed throughout the 1970s, during which time both Arthur P. Jacobs and Alejandro Jodorowsky tried to bring their visions to the screen. In 1981, Lynch was hired as director by executive producer Dino De Laurentiis.

The film was not well received by critics and performed poorly at the American box office. Upon its release, Lynch distanced himself from the project, stating that pressure from both producers and financiers restrained his artistic control and denied him final cut privilege. At least three different versions have been released worldwide. In some cuts, Lynch 's name is replaced in the credits with the name Alan Smithee, a pseudonym used by directors who wished not to be associated with a film for which they would normally be credited.

A Duke's son leads desert warriors against the galactic emperor and his father's evil nemesis when they assassinate his father and free their desert world from the emperor's rule.

The film is an adaptation of the first of a series of novels (see Dune, by Frank Herbert) and incorporating some elements from the later novels. The pre-production process was slow and problematic, and the project was handed from director to director.

Upon completion, the rough cut of Dune without post-production effects ran over four hours long, but Lynch's intended cut of the film (as reflected in the 7th and final draft of the script) was almost three hours long.

However, Universal and the film's financiers expected a standard, two-hour cut of the film. To reduce the run time, producers Dino De Laurentiis, his daughter Raffaella, and director Lynch excised numerous scenes, filmed new scenes that simplified or concentrated plot elements, and added voice-over narrations, plus a new introduction by Virginia Madsen. Contrary to popular rumors, Lynch made no other version besides the theatrical cut; no three to six hour version ever reached the post-production stage. However, several longer versions have been spliced together. Although Universal has approached Lynch for a possible director's cut of the film, Lynch has declined every offer and prefers not to discuss Dune in interviews.

Dune premiered in Washington, D.C., on December 3, 1984, at The Kennedy Center and was released worldwide on December 14. Pre-release publicity was extensive, not only because it was based on a best-selling novel, but because it was directed by Lynch, who had success with Eraserhead and The Elephant Man. Several magazines followed the production and published articles praising the film before its release, all part of the advertising and merchandising of Dune, which also included a documentary for television as well as items placed in toy stores.