watch 00:59
The Loop (Movies)
Do you like this video?
Dunkirk 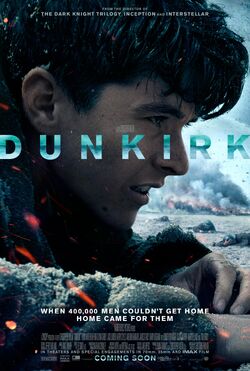 The film premiered on 13 July 2017 at Odeon Leicester Square in London, England and was released in the United Kingdom and United States on 21 July 2017 by Warner Bros. Pictures.

In May 1940, Germany advanced into France, trapping Allied troops on the beaches of Dunkirk. Under air and ground cover from British and French forces, troops were slowly and methodically evacuated from the beach using every serviceable naval and civilian vessel that could be found. At the end of this heroic mission, 330,000 French, British, Belgian and Dutch soldiers were safely evacuated.

Dunkirk received critical acclaim, with praise for its direction, cinematography and acting, with some critics calling it Nolan's best film to date and one of the greatest war films ever. On the review aggregator Rotten Tomatoes, it holds an approval rating of 93% based on 319 reviews, with an average of 8.7/10. The site's critical consensus reads: "Dunkirk serves up emotionally satisfying spectacle, delivered by a writer-director in full command of his craft and brought to life by a gifted ensemble cast that honors the fact-based story."On Metacritic, the film has a weighted average score of 94 out of 100 based on 52 critics, indicating "universal acclaim". According to AlloCiné, the film has an average note of 4.1/5, based on 22 critics. Audiences polled by CinemaScore gave an average grade of "A−" on an A+ to F scale.

Retrieved from "https://movies.fandom.com/wiki/Dunkirk_(2017)?oldid=179757"
Community content is available under CC-BY-SA unless otherwise noted.