watch 03:27
Wiki Targeted (Entertainment)
Do you like this video?
Play Sound
Early Man 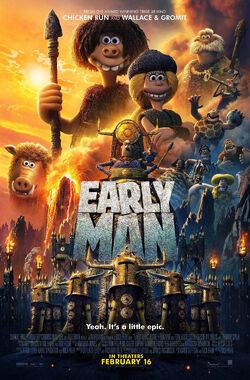 Early Man is a British stop-motion animated adventure comedy film directed by Nick Park. The voice cast of the film consists of Eddie Redmayne, Tom Hiddleston, Maisie Williams, and Timothy Spall. It is the creator of Wallace and Gromit and Chicken Run.

Set at the dawn of time, when prehistoric creatures and woolly mammoths roamed the earth, Early Man tells the story of Dug, along with sidekick Hognob as they unite his tribe against a mighty enemy Lord Nooth and his Bronze Age City to save their home. 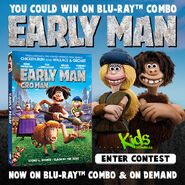 Retrieved from "https://movies.fandom.com/wiki/Early_Man?oldid=262963"
Community content is available under CC-BY-SA unless otherwise noted.