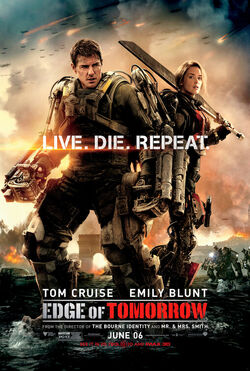 Edge of Tomorrow (also marketed with the tagline Live Die Repeat) is a 2014 American military science fiction film starring Tom Cruise and Emily Blunt. Doug Liman directed the film based on a screenplay adapted from the 2004 Japanese light novel All You Need Is Kill by Hiroshi Sakurazaka. The film takes place in a future where Earth is invaded by an alien race. Major William Cage (Cruise), a public relations officer inexperienced in combat, is forced by his superiors to join a landing operation against the aliens. Though Cage is killed in combat, he finds himself in a time loop that sends him back to the day preceding the battle every time he dies. Cage teams up with Special Forces warrior Rita Vrataski (Blunt) to improve his fighting skills through the repeated days, seeking a way to defeat the extraterrestrial invaders.

In late 2009, 3 Arts Productions purchased the rights to the novel and sold a spec script to the American studio Warner Bros. Pictures. The studio produced the film with the involvement of 3 Arts, the novel's publisher Viz Media, and Australian production company Village Roadshow. Filming began in late 2012, taking place in England at Leavesden Studios outside London, and other locations such as Trafalgar Square and Saunton Sands. Nine companies handled the visual effects.

The film was released in theaters on the weekend of May 30, 2014, in 28 territories, including the United Kingdom, Brazil, Germany, Spain, India, and Indonesia. On the weekend of June 6, 2014, it was released in 36 additional territories, including North America (United States and Canada), Australia, China, and Russia. The film grossed over $369 million in theaters worldwide and received largely positive reviews from critics.

Major William "Bill" Cage (Tom Cruise) and Special Forces soldier Rita Vrataski (Emily Blunt) team up to fight a hostile alien race known as Mimics, with Cage continually returning to a fatal battle through a time loop. The action of Edge of Tomorrow unfolds in a near future in which an alien race has hit the Earth in an unrelenting assault, unbeatable by any military unit in the world.

In the beginning of the story, Cage (Cruise) is an officer who has never seen a day of combat when he is unceremoniously dropped into what amounts to a suicide mission. Killed within minutes, Cage now finds himself inexplicably thrown into a time loop forcing him to live out the same brutal combat over and over, fighting and dying again and again. But with each battle, Cage becomes able to engage the adversaries with increasing skill, alongside Special Forces warrior Rita Vrataski (Blunt). And, as Cage and Rita take the fight to the aliens, each repeated encounter gets them one step closer to defeating the enemy.

In April 2010, Warner Bros. bought a scripted adaptation of Hiroshi Sakurazaka's 2004 novel All You Need Is Kill by Dante W. Harper in a deal worth $3 million. The project went through a development process at the studio before director Doug Liman signed on to helm the project. Since then, the script has seen a slew of other writers tackle various rewrites. Those writers are Joby Harold, Steve Kloves, Christopher McQuarrie, Tim Kring, Jez Butterworth, and, most recently, Alex Kurtzman and Roberto Orci.

While the studio was originally considering Brad Pitt for the lead role, Tom Cruise was locked into the role in December 2011.

Filming began in London and Warner Bros Studios, Leavesden near Watford in September 2012. Trafalgar Square, London, was completely shut down in November to allow the production team to film shots for the movie.