Start a Wiki
watch 01:48
The Loop (Movies)
Do you like this video?
Elephant Tales 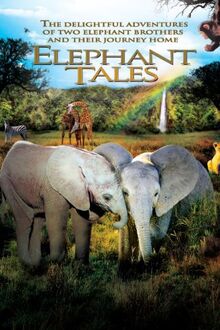 Two cheetahs tell the story of two happy elephants named Zef and his little brother, Tutu. Who have the biggest backyard in the world to play in; the wild plains of Africa. They merrily chase zebras, ostriches and warthogs, scarring them silly. There is a whole bunch of fun stuff to be doing and Zef is just the big brother to show Tutu how to get into all kinds of (mischievous) trouble. One night Tutu goes looking for Zef, while they're gone their mother and the family herd are killed in the dark of one dreadful night by poachers (aka) "The Badness". To cover up the truth of their fate from Tutu, Zef makes up a story about a rainbow taking their mom to the sky. Now, Tutu needs to find that rainbow and their mom. Zef wants to find a new herd, so they go off in search of one. During their journey they come across an orphan chimpanzee named Chump living all alone in a Baoba tree claiming he's "King of the Jungle". Tutu invites him to come along on their journey, much to Zef's objection, Tutu is determined to find their mom by following the rainbow, but Zef says she's gone and they need find a new herd, after their argument Tutu and Zef go their sepreate ways shortly after Zef and chump are caught in a wind storm, once it lets up Zef and Chump meet a young skiddish giraffe named Stretch who is also an orphan who also joins the two on their journey. Meanwhile, Tutu becomes hopelessly lost but soon meets up with a herd of African cattle who invite him to follow them back to their village. Later that night Tutu sees they're locked up behind a fence and dedicded to let them out much to their dismay. The next day Tutu becomes lost again, but soon hears Zef calling for him, as he follows the sound of his voice Zef ends up getting caught in a poacher's trap and is soon taken away in a truck. Tutu and company soon track Zef to the poacher's camp where they have other animals in cages including a young lion cub who's the son of the "real" King of the Jungle, but is also an orphan. After realeasing all the other animals Tutu accidently sets the camp on fire, which almost costs the cub his life but is ultimatley saved by Chump. Tutu, Zef and thier new friends continue on their journey together now as their own family and decide to follow some peices of rainbow candy that have somehow mysteriously fallen out of the sky, after going for miles and miles without end, before long they get tired and accidently get seperated from Cub. After it starts to rain they decide to rest for a while inside a cave, where Zef tells Tutu the truth about their mom and how "The Badness" killed her along with Chump and Stretch's mom's. Pretty soon they hear a truck rumbling and see that its "The Badness" once more and decide to put and end to their killing ways once and for all, later that night inside their camp Tutu finds craits full of animal hoorns and tusks, inluding his mom's. The next morning the animals, including Cub put thier plan into action, by trapping the poachers in their own traps, just as Tutu and Zef are about to finish them off once and for all they realize that if they did all that they'd be no better than "The Badness" and they were. Out of nowhere a rainbow appears in the sky bigger and brighter than they'd ever seen and soon find that it has lead them to a small home they at first think is a place of more badness, but soon see a bunch of human kids running around with balloons. Though they still don't see their new mom anywhere, until a female elephant appears inside who ultimatley adopts Tutu and Zef as her own and a banner over the enterance reavels a sign reading "Ella's Orphanage". The animals have all found a new home there as all the kids welcome them with open arms bottle-feeding them and making them feel a part of their family, at the very end it was revealed that the peices of rainbow candy that fell out of the sky were from a veggitarin vulture whom Tutu met earlier in the film.

Retrieved from "https://movies.fandom.com/wiki/Elephant_Tales?oldid=192765"
Community content is available under CC-BY-SA unless otherwise noted.