watch 01:45
The Loop (Movies)
Do you like this video?
Play Sound
Elvis & Nixon 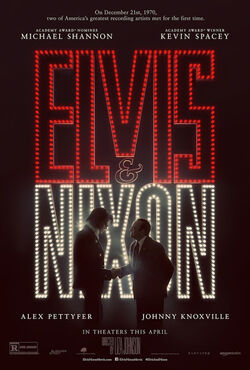 On the morning of December 21, 1970, actor-singer Elvis Presley shows up to the White House and requests an urgent meeting with President Richard Nixon. Presley opposes the drug culture, the hippie movement, SDS, and Black Panthers; he wants Nixon to swear him in as an undercover agent in the Bureau of Narcotics and Dangerous Drugs. Two of Nixon's senior aides, Dwight Chapin and Egil Krogh, set up a meeting between the two men. At first, Nixon is annoyed by what he sees as a PR stunt, but over the course of the meeting finds that they have much in common: they are both self-made men who came from humble beginnings and worked hard for their success, and they both feel unappreciated by an American culture they no longer understand. They part on good terms, and pose together for an iconic photograph.

Principal photography began on January 12, 2015, in New Orleans, Louisiana. Filming also took place in Shreveport, Louisiana and Los Angeles, California. Co-writer Joey Sagal who has previously played Elvis Presley as an actor on stage, and in films and television, had in his childhood met Presley when his father — Boris Sagal — directed Presley in 1965's Girl Happy.

On Rotten Tomatoes the film has a rating of 77% based on 141 reviews and an average rating of 6.5/10. The site's critical consensus reads, "Elvis & Nixon may not do much to expand on its absurdly iconic photographic source material, but it's rarely less than engaging thanks to its talented starring duo." On Metacritic, the film has a score of 59 out of 100 based on 37 reviews, indicating "mixed or average reviews".

Radio Times gave the film an average review but praised the acting: "Michael Shannon is an enjoyably left-field choice for a jaded, increasingly alienated Presley; he’s grown weary of the persona he has to tiresomely maintain, seems to be losing the plot, and yet still creates a stir wherever he treads. Assigned less screen time, Nixon is a more enigmatic figure: gruff, stubborn and played to perfection by Kevin Spacey. ... Shannon and Spacey are a hoot in an entertaining if unenlightening effort". Flickering Myth enjoyed the film: “Elvis & Nixon is an entirely pleasant 86 minutes in the cinema – entertaining, humorous and well-made, albeit somewhat forgettable. Also it’s further proof that a female director can harness the energy of two top male thespians portraying macho men.” What's Worth Seeing also liked the film, writing: "With Michael Shannon as the gun-toting rock-and-roll star and Kevin Spacey as the President, more famous for his downfall a couple of years ahead, director Liza Johnson delivers an unexpectedly sharp, funny and zippy real-life tale of absurdity which would have been surreal beyond measure for everyone involved – except for The King himself." Nigel M. Smith of The Guardian called the film “a breezy comedy nimbly directed” and wrote: "Given that the film is about two of the most recognizable figures of the 20th century, clearly casting is key to its success. Luckily, Johnson hit the jackpot by getting Michael Shannon on board as the King and Kevin Spacey to play the corrupt president."

Retrieved from "https://movies.fandom.com/wiki/Elvis_%26_Nixon?oldid=130909"
Community content is available under CC-BY-SA unless otherwise noted.