Edit
watch 01:23
Wiki Targeted (Entertainment)
Do you like this video?
Play Sound
Emma 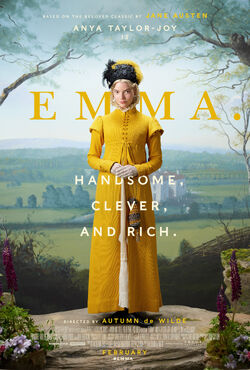 EMMA is a 2020 comedy-drama film directed by Autumn de Wilde and written by Eleanor Catton. It is based on the novel of same name by Jane Austen. The film stars Anya Taylor-Joy, Johnny Flynn and Bill Nighy. This film follows a step towards by the Name of the Queen Emma also been a live in England, a wealthy and elegant young woman living with her father in Regency-era England. While Emma of a ‘queen bee’ in her sleepy little town, Emma amuses herself with matchmaking and meddles in the romantic lives of those closest to her. In this glittering satire of social class, Emma must navigate her way through the challenges of growing up, friendship strife and misguided matches before she can recognise the love that has been there all along and earn her 'happily ever after'.

It was released in the United Kingdom on February 14, 2020, and in the United States on February 21, 2020, by Focus Features. It received positive reviews from film critics while it got one of the Best 2hr length films I've ever seen almost gross $26 million plus this film received a nominees of Academy Awards of Oscars like Best Makeup Artist and Best Costume Design of the Bonus British in 93th Academy Awards.

In Regency-era England, wealthy and beautiful Emma Woodhouse searches for a new companion after her governess, Miss Taylor, marries and becomes Mrs. Weston. Emma settles on Harriet Smith, a younger girl whom Emma supposes is the unclaimed child of a gentleman; Harriet's parents are unknown, but her education has been provided for. Emma learns that Mr. Robert Martin, a tenant farmer of the brother of Emma's brother-in-law, Mr. Knightley, has proposed to Harriet. Though claiming she will not interfere, Emma manipulates Harriet into declining Mr. Martin's offer of marriage, much to Harriet's distress. Emma believes that Mr. Elton, the local vicar, is in love with Harriet and encourages Harriet to transfer her hopes to him, despite Mr. Knightley's warning that she should not involve herself in the situation.

At Christmas time, Emma's older sister and Mr. Knightley's younger brother come to visit. After everyone leaves dinner with the Westons early, Emma finds herself alone in a carriage with Mr. Elton, who declares his love for her. Emma promptly refuses him, and Mr. Elton disappears for six weeks, eventually returning with a wife. Two much-talked-about members of Emma's social circle appear: Jane Fairfax, the governess niece of Miss Bates, and Frank Churchill, Mr. Weston's son from his first marriage. Emma grows jealous of Jane but is entranced by Frank.

Frank's arrival prompts the Westons to hold a ball, where Mr. Elton embarrasses Harriet by pointedly refusing to dance with her. She is rescued by Mr. Knightley, who asks her to dance. Emma and Mr. Knightley also dance together, awakening romantic feelings between them. Though Emma leaves before Mr. Knightley can speak to her, he runs to her home only for their meeting to be interrupted by Frank, who has rescued Harriet after being set upon by Romanichal Travellers. Harriet intimates to Emma that she has fallen in love again, leading Emma to believe Harriet is in love with Frank. Emma again vows not to interfere but manipulates circumstances so that Harriet and Frank may spend more time together.

Emma tries to spend more time with Mr. Knightley and is surprised when he repeatedly ignores her. On a picnic with their entire party of social acquaintances, Frank urges them to play a game to amuse Emma, who unthinkingly insults Miss Bates, leading the party to disband in discomfort. Mr. Knightley rebukes Emma for her behaviour, and a humiliated Emma apologizes to Miss Bates, who accepts her apology without question.

Frank Churchill's wealthy aunt dies, and he is no longer required to be at her beck and call. The Westons reveal he was secretly engaged to Jane Fairfax and waiting for his aunt, who opposed the match, to die. The Westons had hoped he would marry Emma, but Emma is only distressed on account of Harriet. Emma breaks the news to Harriet, who reveals that she is actually in love with Mr. Knightley. Harriet realizes that Emma herself is in love with Mr. Knightley.

Mr. Knightley goes to Emma to comfort her about the news and reveal that he is in love with her and hopes to marry her. Initially pleased with his marriage offer, Emma develops a nosebleed when she realizes how upset Harriet will be. Interfering one last time, she goes to Mr. Martin to make amends, offering him a portrait of Harriet she drew herself. Harriet tells Emma she has accepted Mr. Martin's offer of marriage and that her father has revealed himself now that she is of age; he is not a gentleman, but a tradesman who makes galoshes. Emma congratulates Harriet and invites her and her father to her home.

Though Emma and Mr. Knightley are very much in love, Emma is distressed at the thought of leaving her father alone. To accommodate her wishes, Mr. Knightley suggests that he join them there rather than have Emma quit her father's home. Emma happily agrees, and the two are married.

In October 2018, Anya Taylor-Joy was cast in the film adaptation of Emma, with Autumn de Wilde making her directorial debut with the film. In December 2018, Johnny Flynn joined the cast of the film.

Firle Place in Sussex was used for the exterior of Emma's home. Other filming locations included Lower Slaughter (exteriors) in the Cotswolds standing in for the village of Highbury, Kingston Bagpuize House in Oxfordshire, Wilton House near Salisbury in Wiltshire and Chavenage House at Beverston, Gloucestershire.

Autumn de Wilde decided the title of the film should have a period attached to signify its being a period piece.

In the film, Jane Fairfax outshines Emma by performing the third movement from Mozart's Piano Sonata No. 12 on the fortepiano. A trained pianist, Amber Anderson performed the piece for the soundtrack, and had to learn it twice over to adapt her technique for the shorter keys of the period instrument.

The credit sequence features an original song by Johnny Flynn called "Queen Bee". Isobel Waller-Bridge asked Flynn to write a song for the film. Performed in a similar style to the film's period, Flynn wrote "Queen Bee" to convey Knightley's perspective on Emma.

The soundtrack features many a cappella recordings of folk songs by artists like Maddy Prior and the Watersons. Autumn de Wilde had an immediate conception of the film's music as being rooted in folk music. She also conceived the orchestral score should emulate Sergei Prokofiev's Peter and the Wolf where each character is personified clearly.

Anya Taylor-Joy, Anderson, and Flynn all sing onscreen during the course of the film. Taylor-Joy took pains to explain that her performance of "The Last Rose of Summer" uses an affected style that she imagines Emma Woodhouse would have used to charm her audience.

The film was released on 20 March digitally in the United States, Canada and the United Kingdom through Premium VOD in streaming platforms. This was because of movie theatre closures due to the COVID-19 pandemic restrictions.

This film Available on DVD, Bluray, 4K Ultra Hd and Some of the Bluray Types in May 19, 2020 with the behind the scenes and director's cut like bloopers while it was there.

Emma grossed $10.1 million in the United States and Canada, and $15.1 million in other territories, for a worldwide total of $26 million.

In North America, the film made $230,000 from five theaters in its opening weekend for a per-venue average of $46,000, the highest of 2020 at that point. The film went wide two weeks later, grossing $5 million from 1,565 theaters and finishing sixth at the box office.

Emma Received Positive Reviews from film critics while it one of the best 2hr length films of all time. On Rotten Tomatoes, the film holds an approval rating of 87% based on 254 reviews, with a weighted average of 7.3/10. The website's critics consensus reads: "Other adaptations may do a better job of consistently capturing the spirit of the classic source material, but Jane Austen fans should still find a solid match in this Emma." On Metacritic, the film was assigned a weighted average score of 71 out of 100, based on 48 critics, indicating "generally favorable reviews." Audiences polled by CinemaScore gave the film an average grade of "B" on an A+ to F scale, and PostTrak reported it received an average 3 out of 5 stars, with 44% of people they surveyed saying they would definitely recommend it.