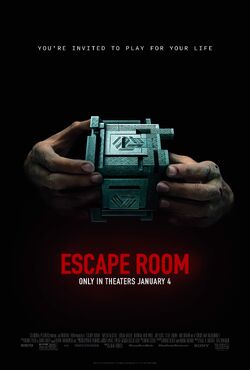 Six people from varied backgrounds are presented with a puzzle cube: Zoey, a physics student, Jason, a wealthy daytrader, Ben, a stockboy, Mike, a truck driver, Amanda, an Iraq War veteran, and Danny, an escape room enthusiast. When they solve the puzzle, they are invited to take part in an escape room with a $10,000 prize. The participants arrive at an office block. They gather in the waiting room, waiting for the Game Master to arrive, but no-one comes.

When Ben tries to leave, the door handle falls off, revealing the challenge to have started. The room turns out to be a giant oven that heats up. They discover how to unlock an escape passage, and climb out before the room is filled with fire. They next find themselves in a winter cabin, where Ben deduces how to open the door. They step out into an icy room where the temperature is dropping. They eventually find the key, but Danny falls through the ice and drowns. Some players notice reminders of traumatic events in their past: a song Ben heard before almost dying in a car crash and a red coat Jason wore when he escaped a shipwreck. The remaining five players enter an upside-down billiards bar, where parts of the floor periodically fall into a shaft below. They realize the room is a giant sliding puzzle and a missing 8 ball is the key. Amanda retrieves the ball and throws it over before plummeting to her death.

The next room is a hospital ward with six beds, each representing a player. It turns out all six were "sole survivors" of a disaster. Mike escaped a mine cave-in, Zoey survived a plane crash, Danny survived when his family died of carbon monoxide poisoning and Amanda survived an IED blast. Zoey realizes that the purpose of the game is to find who is the luckiest of them all. Jason realizes the room is about to be filled with poisonous gas. Zoey refuses to continue playing and instead destroys the room's surveillance cameras. A clip about a heart surgeon called "Dr. Wootan Yu" suggests that someone needs to record a certain heart rate to escape. Mike has the highest heart rate, but not high enough to work. Jason suggests using the defibrillator on Mike. Mike is unwilling at first, but Jason manipulates him by mentioning the mining tragedy. Jason accidentally kills Mike with a shock. He then solves the room by shocking himself just as the gas is released. Jason and Ben escape, but Zoey refuses to follow and disappears into the gas.

Jason and Ben enter a room with optical illusions and strobe lights. While drugged with a hallucinogen, they fight over an antidote. Ben kills Jason and injects the antidote. He then falls into the last room, where a wall moves inwards to crush him (as seen in the prolog). Meanwhile, in the hospital room, employees enter in hazmat gear to dispose of the dead bodies. Zoey reappears and attacks them. Ben solves the last room and meets the Game Master, who controls the game that the Puzzle Maker designed. The Game Master explains that every year they lure in players with something in common – celebrities, savants etc. – and wealthy viewers bet on the result. The Game Master tries to kill Ben, but Zoey intervenes and together they kill the Game Master.

As Ben recovers, Zoey goes with a detective back to the building. The police do not believe Zoey, as all evidence of the game has disappeared. They do not believe Ben either, as he was found to have drugs in his system. While looking at the graffiti on the wall, Zoey notices the words "No Way Out", an anagram for "Wootan Yu", suggesting the game is not over. Six months later, Zoey meets up with Ben. Zoey shows Ben newspaper articles that passed the other players' deaths as everyday accidents. While Ben suggests Zoey should move on, she refuses. She reveals clues to Ben that point to an unlisted building in Manhattan. Ben agrees to go with her. However, the mysterious Puzzle Maker is already preparing to make their flight a new deadly game of survival.

Retrieved from "https://movies.fandom.com/wiki/Escape_Room?oldid=175532"
Community content is available under CC-BY-SA unless otherwise noted.