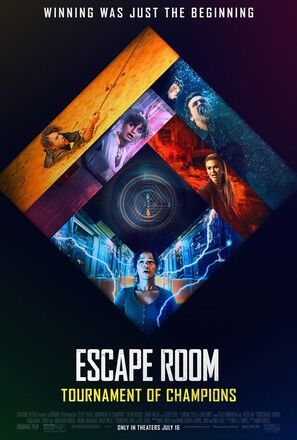 Escape Room Tournament of Champions (also known as the alternative Title is Escape Room 2 in other territories and marketing title is Escape Room:No Way Out) is a 2021 American psychological horror challenge film directed by Adam Robitel. It based on the character by Bragi F Schut and it sequel to the 2019 film's Escape Room. The film stars Taylor Russell, Logan Miller, Isabelle Fuhrman, Thomas Cocquerel, Holland Roden, Carlito Olivero, and Indya Moore. The film follows a group of six people trying to survive a new series of more deadly escape rooms.

After the first film became a surprise hit in 2019, Columbia Pictures approved a sequel. Robitel returned as the director with Schut writing the script, and Russell and Miller reprising their roles alongside the addition of new cast members. Filming took place on Cape Town, South Africa, from August to September 2019.

Escape Room: Tournament of Champions was released in Australia on July 1, 2021, and is scheduled to be released in the United States on July 16, 2021, by Sony Pictures Releasing, following several release date delays. It received mixed reviews from film critics who praises Taylor Russell's acting and elaborating Puzzling while it almost there but criticized some missed or ability while the film's failure to improve upon its predecessors. And it was commercial success, grossing over $34.3 million worldwide against the production budget is $15 million

After escaping the "sole survivor" escape rooms orchestrated by the Minos Corporation, Zoey Davis and Ben Miller decide to confront the shadowy organization after finding coordinates to their New York City-based headquarters in Minos' logo. Zoey is encouraged by her therapist to move on from her trauma and to get over her aerophobia but Zoey opts to drive with Ben instead of flying.

The pair find the Minos headquarters derelict and are accosted by a vagrant who steals Zoey's necklace. She and Ben give chase, being led into a subway train car and stuck inside. The train car separates from the rest of the train and is redirected to a remote station. The train seals Zoey, Ben, and other passengers Rachel, Brianna, Nathan, and Theo inside. Minos reveal themselves to be yet again pulling the strings and the train becomes electrified, becoming another escape room. Zoey and Ben learn that the others are survivors of previous Minos escape rooms.

The group realizes they have to collect subway tokens to escape the train as it rapidly gets more electrified. Theo is killed while the others manage to escape. As the group rest, Nathan reveals his escape room group were all priests, Brianna's were all influencers, and Rachel's consisted of people who didn't feel physical pain.

The survivors enter the next room, a bank room with a slowly closing vault and a deadly laser security system. Deciphering a complex route to get around the lasers, Nathan suffers a crisis of faith and knocks himself unconscious, activating the lasers. The group manages to figure out the route and escape with Nathan. While in the room, Zoey is perplexed by frequent references to someone called Sonya and the fact the escape rooms don't have any connection to the group.

The next room is a beach complete with a shack, lighthouse, and more references to Sonya. As the group starts to figure out puzzles, the beach is revealed to be covered in quicksand. Nathan sacrifices himself to save Rachel and is swallowed up by the sand. As Zoey figures out the room's puzzle, she finds an alternate route out of the escape room just as Brianna unlocks the intended exit to the room. An argument between the group breaks out with Rachel and Ben siding with Zoey. Brianna escapes through the main exit while Rachel and Ben traverse the quicksand to the alternate route. Ben sinks beneath the quicksand and is seemingly killed.

Zoey and Rachel mourn the others and vow to take Minos down. They make their way out through a manhole into the city but they quickly realize they are still in the game when they encounter a panicked Brianna who tells them that acid rain is periodically being sprayed into the room. The group figure out the room's puzzle and open a cab to escape in but once Zoey enters, the cab locks Rachel and Brianna out. Zoey falls into the next room while Rachel and Brianna eventually succumb to the rain.

The next room; a children's bedroom contains a diary from Sonya revealing the rooms are based on a fun day out she had with her mother. Sonya's mother is revealed to be Amanda who had actually survived her fall in the "sole survivor" game and was forced into making rooms for Minos after they abducted Sonya.

Amanda appears in the room and begs Zoey to become the next puzzle maker for Minos. Ben also appears in the room trapped in a cage. When Zoey refuses, Ben's cage starts rapidly filling up with water but Zoey and Amanda work together to free Ben. They start a fire in the escape room and manage to break out, fleeing the facility.

The trio report their findings to the police who retrieve the bodies of Rachel, Brianna, Nathan, and Theo, and the news about Minos goes public. Zoey's necklace is retrieved by an FBI agent who assures her that Minos will be tracked down thanks to Amanda's testimony.

Filled with confidence, Zoey decides to take a plane home with Ben. Onboard, Zoey realizes that the plane is another escape room set up by Minos. Both Zoey and Ben are incapacitated by sleeping gas while the unseen Gamemaster mocks the pair for falling into their latest trap.

In February 2019, a sequel to Escape Room was announced as being in active development, with Adam Robitel set to return to direct along with screenwriter Bragi F. Schut and producer Neal H. Moritz.

In April 2019, Robitel stated in an interview with Bloody Disgusting that one of the challenges the production team faced in its development was to figure out how to design new escape rooms that would outdo those the original film featured. He said:We did fire, gravity, ice, cold, gas so we need to outdo ourselves now. We're in the box. I can't draw and quarter somebody, so what are those visual ticking clocks? We have some really cool stuff we're developing and hopefully the audience will think that way too, but it's tougher.

He continued, "We're knee deep in developing the sequel. We're exploring various ideas with how it all plays out."

He intended the first film's final scene, which depicted an escape room disguised as a hijacked airplane, to suggest that Minos, the organization behind the deadly escape rooms, may be more powerful, sinister and given to surveilling than previously thought, which he planned to expand upon in the sequel. He said:I think the implication is that Minos is far more widespread in the halls of power in our society than we realize. [. . .] I think we're in a time of real paranoia, whether it's institutions or police state. We've never been in a time of such divisiveness as a culture, so we always love the idea.

The film's official title, Escape Room: Tournament of Champions, was announced in a press conference on May 20, 2021.

This film released in July 16, 2021 on United States and United Kingdom and always secretly cinema of Austraila will be July 2, 2021. This film delayed 3 times by coronavirus pandemic which it secretly released in April 17, 2020 originally to January 7, 2022.

When asked about whether the film would also be available to stream at the same time it was released to theaters to accommodate those uncertain of the safety of in-theater attendance due to the COVID-19 pandemic, Robitel stated that the film will pursue a standard theatrical release with no streaming alternative because he believes that the darkness of the standard theater room would allow the film to be at its most frightening and thrilling.

As of August 12, 2021, Escape Room: Tournament of Champions has grossed $23.8 million in the United States and Canada, and $10.5 million in other territories, for a worldwide total of $34.3 million.

In the United States and Canada, the film was released alongside Space Jam: A New Legacy, and was projected to gross $7–10 million from 2,775 theaters in its opening weekend. The film made $3.8 million on its first day, including $1.2 million from Thursday night previews. It went on to debut to $8.8 million, finishing third at the box office. It fell 60% in its second weekend to $3.5 million, finishing sixth, making it a box office success, only film was known of nostalgia version of Friday the 13th.

Escape Room Tournament of Champions receive mixed reviews from film critics. On Rotten Tomatoes, the film has an approval rating of 42% based on five reviews, with an average rating of 5.3/10. The website's critics consensus reads, "Escape Room: Tournament of Champions may appeal to fans of the original who've been hoping for a sequel, but its increasingly convoluted rules add up to a very unpleasant game night." According to Metacritic, which assigned a weighted average score of 47 out of 100 based on 14 critics, the film received "mixed or average reviews." Audiences polled by CinemaScore gave the film an average grade of "B" on an A+ to F scale, the same as the first film, while PostTrak reported 69% of audience members gave it a positive score, with 44% saying they would definitely recommend it.

William Bibbiani of the TheWrap wrote: "Make no mistake: Escape Room: Tournament of Champions may be fun, it's also incredibly stupid. The premise makes no sense. The mechanics make no sense. The plot makes no sense. Look elsewhere for storytelling sanity. Look here if you want to see confident, creepy absurdity, with a ghoulish imagination and showmanship to spare."

Jesse Hassenger of The A.V. Club gave the film a "C+", writing: "After 30 or 40 minutes, it becomes clear that, despite a few more callbacks, this is a more-of-the-same sequel, not a next-level sequel." From The Hollywood Reporter, John DeFore called the film an "underwhelming attempt to turn a tight little thriller into a sequel-spawning franchise" and said: "Tournament provides genre buffs with a lesson in diminishing returns, and may leave most of them impatient for an unambiguous 'Game Over.'"