View src
watch 01:33
House of the Dragon Trailer - The Loop
Do you like this video?
Play Sound
Ethan Hawke 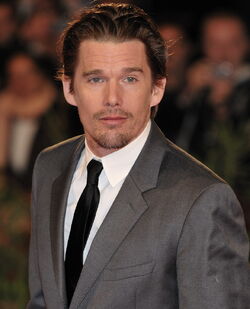 Ethan Green Hawke (born November 6, 1970) is an American actor, writer and director. Nominated four times for Academy Awards, both as an actor and a writer, Hawke has also been nominated for a Tony Award, and has directed two feature films, three Off-Broadway plays, and a documentary. He also wrote the novels The Hottest State (1996) and Ash Wednesday (2002).

Born in Austin, Texas, to high school sweethearts James and Leslie Hawke, his mother was a charity worker, and his father an insurance actuary. His parents married young, when Hawke's mother was 17, and Ethan was born a year later. Hawke's parents were students at the University of Texas at Austin at the time of his birth, and separated and later divorced in 1974.

After his parents' divorce in 1974, Hawke was then raised by his mother. After relocating several times before settling in New York City, Hawke attended the Packer Collegiate Institute in Brooklyn Heights. His mother remarried when he was 10, at which time the family moved to West Windsor Township, New Jersey where Hawke attended West Windsor Plainsboro High School (now West Windsor-Plainsboro High School South). Later, Hawke transferred to the Hun School of Princeton, a secondary boarding school, from which he graduated in 1988.

Hawke aspired to be a writer during his formative years, but in high school he developed an interest in acting. At age 13 he made his stage debut in a school production of George Bernard Shaw's Saint Joan, and also appeared in West Windsor-Plainsboro High School productions of "Meet Me in St. Louis", and "You Can't Take It with You". While at the Hun School he took acting classes at the McCarter Theatre on the Princeton campus, and after graduation he studied acting at Carnegie Mellon University in Pittsburgh. He eventually dropping out after he was cast in the 1989 film Dead Poets Society. He enrolled in New York University's English program on two separate occasions, but dropped out in both cases in order to pursue acting roles.