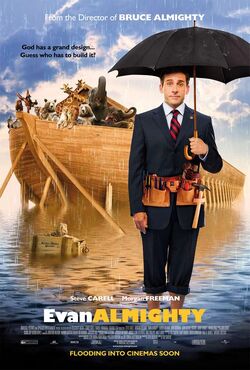 Evan Almighty is a 2007 comedy movie spin-off to 2003's Bruce Almighty. It was produced by Universal Pictures, Spyglass Entertainment, Original Film and Shady Acres Entertainment and starred Steve Carrell. It was released date on June 22, 2007.

The film's screenplay was originally titled The Passion of the Ark, and was written by Bobby Florsheim and Josh Stolberg. It became the subject of a seven-studio bidding war in April 2004. The script was sold to Sony Pictures in a deal worth $2,500,000 plus a percentage of the profits, a record for a Spec script from previously unproduced writers. Universal Studios immediately made a deal to co-produce the script with Sony and have Steve Oedekerk rewrite it into the sequel to Bruce Almighty. Steve Oedekerk had previously been involved with Bruce Almighty as an executive producer and co-writer of the screenplay (with Steve Koren and Mark O'Keefe, who wrote the story). The studio later discarded the original The Passion of the Ark script completely, and Oedekerk fashioned a new script from scratch (only he received final credit on the finished film as screenwriter).

Jim Carrey was asked to reprise his role as Bruce in the sequel, and when he declined, director Tom Shadyac convinced Steve Carell to accept the leading role in the sequel. . The studio later discarded the original The Passion of the Ark script completely, and Oedekerk fashioned a new script from scratch (only he received final credit on the finished film as screenwriter). Shadyac, reflecting on the first film, stated "[Carell] delivered some of the funniest stuff in the movie. We thought, 'Why not take that character and spin him off into a different film?'"

Jim Carrey and Jennifer Aniston both declined to reprise their roles from Bruce Almighty. Although he did act in a sequel to Ace Ventura: Pet Detective, Carrey has said he is "not a big fan of doing the same character twice." This marks the third time (following Dumb and Dumberer: When Harry Met Lloyd and Son of the Mask) that a sequel has been made to a film in which Jim Carrey declined to reprise his role.

Construction of the ark began in January 2006 and the scenes involving the ark were shot in a Crozet, Virginia subdivision called Old Trail. The ark was designed to meet the actual measurements of the biblical ark, measuring 450 feet (140 m) long, 80 feet (24 m) wide, and 51 feet (16 m) high. The ark's layout was also based on pictures in several children's books that crew members had read in their childhoods. When the characters were filmed during the day building the ark or were on location elsewhere, crew members would further construct the ark at night. A concrete base was built to support the weight of the large ark; after filming was completed, the ark was taken down in a week, and the base in another week.

To create Evan's beard and long hair, three designers would take three hours each day adding individual hairs using prosthetic adhesive and making Carell wear custom wigs. The wigs consisted of both human and yak hair. With his new look, Carell was sometimes nicknamed "Mountain Man", "Retrosexual", or "Unabomber." For his costumes, designers spoke with textile experts, researched historical information on the clothing that was likely worn at the time of Noah, and used aged fibers for the clothing. Scenes for the film were filmed in various locations in Virginia, including areas in and around Crozet, Waynesboro,Richmond, Charlottesville, and Staunton, though some filming did take place at Universal Studios in Hollywood, California.

For the CGI used throughout the film, companies Rhythm & Hues (R&H) and Industrial Light & Magic (ILM) developed different parts of the film. R&H focused on the animation of the animals, while ILM completed the final scene of the ark rushing through Washington D.C. Lindy De Quattro, the ILM associate visual effects supervisor, revealed that "This is the first time where we had to do a whole series of shots that were happening mid-day, where you were going to get a really long look at the water and what it was doing." The company initially experienced problems creating the water effects and had to develop new tools which would choreograph the movements of the water. In addition, ILM used similar tools that were used on their prior film Poseidon. Lighting was also an issue as the characters on the ark had been filmed on a Greenscreen stage, and the visual effects company had to ensure that the lighting matched that of the characters and the outside setting. Details were added to the ark for long-distance shots to make the design of the ark more appealing and relate the ark's size to scale in comparison to the amount of water. To complete the scene, ILM used thirty to sixty crew members and produced 200 shots over a yearlong period between April 2006 and May 2007. Rhythm & Hues created 300 pairs of animals for use on the ark and fifteen pairs with higher detail for closeup shots. R&H was also assisted by C.I.S. Hollywood, another visual effects company, who provided a large number of composites, involving hundreds of greenscreen animal elements. In scenes where there are multiple species of animals, crew members would film the animals on the greenscreen and R&H and C.I.S would digitally add the animals one at a time, sometimes taking several weeks to a couple months. Andy Arnett, the animation supervisor, declared that "The research was extensive. It took six or seven months to perfect the look and feel of the animals before we had the first shot out the door." For the scene in Congressman Long's office, CGI was used the entire time for the fish that follow Evan around from the fish tank. CafeFX, the visual effects company hired for the scene, ordered ten different kinds of Tropical fish from a local store and studied their movements to imitate them on screen using computer animation. Jeff Goldman, the visual effects supervisor, stated "Early in the sequence, we mimicked the actual behavior of the fish in our animation, but as the scene plays out, the fish are a counterpoint to Steve Carell's comedic timing."

Retrieved from "https://movies.fandom.com/wiki/Evan_Almighty?oldid=155281"
Community content is available under CC-BY-SA unless otherwise noted.