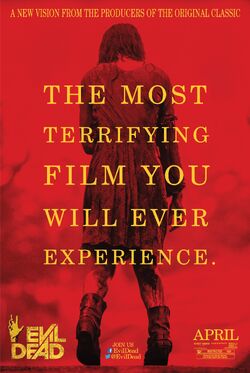 Evil Dead is a 2013 American supernatural horror film directed by Fede Alvarez in his directorial debut, written by Rodo Sayagues and Álvarez and produced by Robert Tapert, Sam Raimi, and Bruce Campbell.

David and his girlfriend Natalie arrive at a cabin in the woods, where the pair meet up with his younger sister Mia and his friends Eric and Olivia. The group plans to stay in the cabin while Mia overcomes her addiction to heroin. The group discover the cellar, littered with rotting animal corpses, a shotgun, and a book called the Naturom Demonto.

Eric, despite written warnings, reads aloud an incantation and awakens a malevolent force. Mia begins seeing a bloody girl in the woods, and begs the group to leave because she is scared. They refuse, believing that she is simply experiencing the effects of withdrawal. Mia steals the car keys and drives away from the cabin. As Mia drives her way out, she then sees a demon girl on the road, startling her, causing her to pull over and crash into a swamp. Emerging from the mud water, the demon chases Mia through the woods. Mia stumbles into a circular opening to a thorn bush and becomes entangled by possessed vines. As Mia struggles to de tangle, she then sees the abomination version of herself. A thorn vine comes out of its mouth and rapes Mia, crawling up her leg into her vagina, infecting her with the possession. David and Olivia find Mia and take her back to the cabin.

Later, David finds his murdered dog along with a bloodied hammer, and goes to confront Mia, who is in the shower. In the bathroom, he sees her scalding herself in the shower turning the faucet all the way to extremely hot. David tries to drive her to a hospital, but heavy rains flood the only road back. Meanwhile, Eric becomes more and more convinced that the book is the cause of all that.

That night, the possessed Mia comes into the living room with a shotgun and shoots David in the arm as a strong wind blows through the cabin, Mia warns the others that they are all going to die tonight, after which she passes out. David instructs Olivia to get the gun away from Mia, but before she can, Mia wakes up and overpowers her, then projectile vomits blood all over her face. Olivia manages to shove Mia off, sending her tumbling down into the cellar where she is locked in by Eric. Olivia goes to the bathroom to wash the blood off her face and get a sedative for Mia, but is terrified when she sees her own disfigured reflection in the mirror. Olivia tries to rush back to the others, but becomes frozen and possessed before she could get out of the room. Hearing a door slam, Eric goes to the room and finds her cutting into her cheek with a mirror shard behind the shower curtain. Olivia attacks and stabs Eric in the chest, who grabs a broken piece of the sink and bludgeons her to death. In the shed, David nurses Eric's wounds, and Eric confides that he believes that when he read the book, it released "something evil". Meanwhile, Mia lures Natalie into the cellar, where she bites her hand. Natalie tries to attack Mia with a box cutter, but Mia takes it from her and uses the blade to split her own tongue in half, before planting a bloodied kiss on Natalie's mouth. David opens the trapdoor, interrupting the assault and allowing Natalie to escape. After the demon tells him that Mia no longer exists, he chains it up and locks the cellar door.

Eric explains to David that, according to the Naturom Demonto, the Taker of Souls must claim five souls in order to unleash the Abomination. In the kitchen, while cleaning the bite wound, Natalie becomes convinced that her arm is infected and amputates it with an electric knife. David does his best to patch up her wounded arm, while Eric continues to explain that Mia must be "purified" either by live burial, bodily dismemberment, or burning. As they debate, the possessed Natalie attacks the pair with a nail gun, but David manages to shoot off her remaining arm with the shotgun, Natalie turns back to normal, but collapses into David's arms and bleeds to death from all her wounds.

Eric convinces David to kill Mia and David plans to burn down the cabin with Mia in it. However, as Mia starts singing a song from their childhood, he has a change of mind and decides to bury her instead. He digs a grave, then enters the cellar to subdue Mia, who attempts to drown him. Eric intervenes and clubs Mia with a hammer, but not before being fatally stabbed and succumbing to his wounds. David proceeds to sedate and bury Mia, unearthing and defibrillating her afterwards, which causes the demon to be exorcized and heals her. The siblings reconcile. As David enters the cabin to retrieve the car keys, a possessed Eric's corpse stabs him in the neck with barb wire cutters. Mia, who escaped her buried hole but is now back to normal from being healed, comes in and sees David with the wound in his neck. Mia tries to help him. David tells Mia to go without her which she refuses to leave without him. Mia is then distracted by the possessed corpse of Eric when seeing it, David locks Mia outside and shoots a gasoline can inside, destroying Eric's body and killing himself.

Mia tearfully watches the cabin burn down. She picks up an empty amulet and a bloody rain drop falls on it, blood rains from the sky, and the Abomination arises, now that five souls have been claimed. The Abomination attacks Mia. Mia tries to flee in a car but the Abomination bursts through the window and touches her leg with a heated hand, making Mia get out of the car. Mia rushes into the cabin which stopped burning from the rain and grabs a chainsaw. As Mia battles the Abomination, her hand gets stuck under an open car window. She notices that her hand is loose as she is struggling to get her hand out, realizing that the only way to set her free is to let her hand go so she loosens it all the way and tears it off. She then halves the Abomination with a chainsaw. Its corpse sinks into the ground and the blood-rain stops. Mia escapes into the woods and wanders off into the distance. Unknown to her, the Naturom Demonto is still intact.

In a post-credits scene, a silhouetted Ash Williams says "Groovy" and looks at the camera before it cuts to black.

After defeating the Abomination, she walks home, but ends up collapsing in exhaustion on the road from all the wounds, stopping a man who drives by. The man takes her to his truck to drive her to the hospital. As the camera zooms into Mia in her sleep, she awakes suspiciously.

Retrieved from "https://movies.fandom.com/wiki/Evil_Dead_(2013)?oldid=212872"
Community content is available under CC-BY-SA unless otherwise noted.