Start a Wiki
watch 01:32
The Loop (Movies)
Do you like this video?
Exodus: Gods and Kings 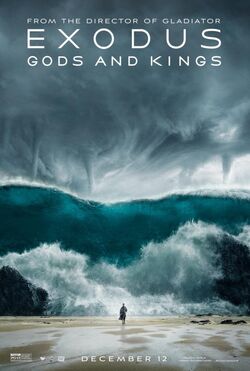 The film is dedicated to Scott's younger brother, Tony, who commited suicide in 2012.

In 1300 BCE, Moses, a general and member of the royal family, prepares to attack the Hittite army with Prince Ramesses. Ramesses' father Seti I tells the two men of a recent prophecy in which one (of Moses and Ramesses) will save the other and become a leader. During the attack on the Hittites, Moses saves Ramesses' life, leaving both men troubled. Later, Moses is sent to the city of Pithom to meet with the Viceroy Hegep, who oversees the Hebrew slaves. Upon his arrival, he encounters the slave Joshua and is appalled by the horrific conditions of the slaves. Shortly afterwards, Moses meets Nun, who informs him of his true lineage; he is the child of Hebrew parents who was sent by his sister Miriam to be raised by Pharaoh's daughter. Moses is stunned at the revelation and leaves angrily. However, two Hebrews also overhear Nun's story and reports their discovery to Hegep.

Seti dies soon after Moses' return to Memphis, and Ramesses becomes the new Pharaoh (Ramesses II). Hegep arrives to reveal Moses' true identity, but Ramesses is conflicted about whether to believe the story. At the urging of Queen Tuya, he interrogates the servant Miriam, who denies being Moses' sister. When Ramesses threatens to cut off Miriam's arm, Moses comes to her defence, revealing he is a Hebrew. Although Tuya wants Moses to be put to death, Ramesses decides to send him into exile. Before leaving Egypt, Moses meets with his birth mother and Miriam, who refer to him by his birth name of Moishe. Following a journey into the desert, Moses comes to Midian where he meets Zipporah and her father, Jethro. Moses becomes a shepherd, marries Zipporah and has a son Gershom.

Nine years later, Moses gets injured during a rockslide. He comes face to face with a burning bush and a boy called Malak, who serves as a representation of God. While recovering, Moses confesses his past to Zipporah and reveals what God has asked him to do. This drives a wedge between the couple, because Zipporah fears he will leave their family. After he arrives in Egypt, Moses reunites with Nun and Joshua, as well as meeting his brother Aaron for the first time. Using his military skills, he trains the slaves in the art of war. The Hebrews start attacking the Egyptians, prompting Ramesses to execute slaves until Moses gives himself up. Malak appears to Moses and explains that ten plagues will affect Egypt. All the water in the land turns to blood, and the Egyptians are further afflicted by the arrival of frogs, lice, and flies. Moses returns to confront Ramesses, demanding the Hebrews be released from servitude. Ramesses refuses to listen, insisting that to free the slaves would be economically impossible. The plagues of the death of livestock, boils, hail and thunder, locusts, and darkness continue to affect the Egyptians. While conversing with Malak, Moses is horrified at learning the tenth plague will be the death of all firstborn children. The Hebrews protect themselves by covering their doors with the blood of lambs, as instructed to them by Moses. Ramesses is devastated over his son's death and relents, telling Moses and the Hebrews to leave.

During the exodus from Egypt, the Hebrews follow Moses' original path through the desert and towards the Red Sea. Still grieving for his son, Ramesses decides to go after the Hebrews with his army. After making their way across the rocky mountains, Moses and the Hebrews arrive at the edge of the sea, uncertain about what to do. Moses flings his sword into the water, which begins to recede. Ramesses and his army pursue the Hebrews, but Moses stays behind to confront them. The Red Sea reverts to its normal state, drowning the majority of the Egyptians (crossing the Red Sea). Moses survives and makes his way back to the Hebrews. Ramesses is revealed to have survived, but he is distraught over the destruction of his army. Moses leads the Hebrews back to Midian, where he reunites with Zipporah and Gershom. At Mount Sinai, after seeing Malak's displeasure at the Hebrews' construction of the Golden Calf, Moses transcribes the Ten Commandments. Years later, an elderly Moses riding with the Ark of the Covenant sees Malak walking with the Hebrews through the desert.

Exodus: Gods and Kings has received mixed to negative reviews from critics. They praised the acting and visuals, but criticized the pacing, thin screenwriting and lack of character development. The film has a "rotten" score of 28% on Rotten Tomatoes based on 165 reviews, with an average rating of 4.8 out of 10. The critical consensus states, "While sporadically stirring, and suitably epic in its ambitions, Exodus: Gods and Kings can't quite live up to its classic source material." On Metacritic, the film has a score of 52 out of 100, based on 42 critics, indicating "mixed or average reviews".

Retrieved from "https://movies.fandom.com/wiki/Exodus:_Gods_and_Kings?oldid=205646"
Community content is available under CC-BY-SA unless otherwise noted.