Start a Wiki
watch 01:27
The Loop (Movies)
Do you like this video?
Extra Ordinary 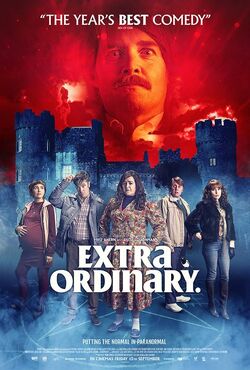 The film premiered at South by Southwest on March 10, 2019. The film was released on September 13, 2019, by Wildcard Distribution.

On Rotten Tomatoes, the film has an approval rating of 100% based on 27 reviews, with an average rating of 7.15/10. On Metacritic the film has a weighted average score of 70 out of 100 based on reviews from 4 critics, indicating "generally favorable reviews".

Retrieved from "https://movies.fandom.com/wiki/Extra_Ordinary?oldid=186433"
Community content is available under CC-BY-SA unless otherwise noted.