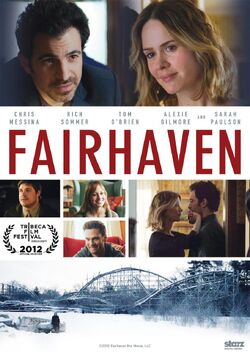 Fairhaven is a comedy drama written, directed and produced by Tom O'Brien who also stars in the film along with Chris Messina. Sarah Paulson and Rich Sommer. Filming took place in Fairhaven, Massachusetts and is set for a January 2013 release.

A former high school football star and one time college athlete, Jon has landed back in the place of his youth -- Fairhaven -- a small fishing village on the Massachusetts coast. Now in his early thirties, and with the promise of younger days seemingly washed ashore, Jon's vague feelings of dissatisfaction are crystallized by a television interview with his football hero Tom Brady, who proclaims that, even after three super bowl wins, "There's got to be something more than this." Jon recounts his epiphany to Sam, old friend and schoolmate who married early, fathered early, divorced early and never left town. Sam made his own peace with small town life years ago, and is happy enough just to provide a stable home for his loving daughter, Cara, while secretly still pining for his beautiful ex-wife Kate. Together, Jon and Sam anticipate the return of Dave, the third member of their once-indomitable trio. Having left town seven years ago and never looked back, Dave is finally returning to Fairhaven on the occasion of his estranged father's death. As tonic to Jon's soulful self-inquiry and Sam's stoic loneliness, Dave is determined to inject some heavy-duty, Vegas-style fun into the funeral weekend. But when old dreams and simmering resentments come to the beer & tequila-soaked surface of their reunion, not even Dave can fend off a healthy dose of reality.

Retrieved from "https://movies.fandom.com/wiki/Fairhaven?oldid=74532"
Community content is available under CC-BY-SA unless otherwise noted.